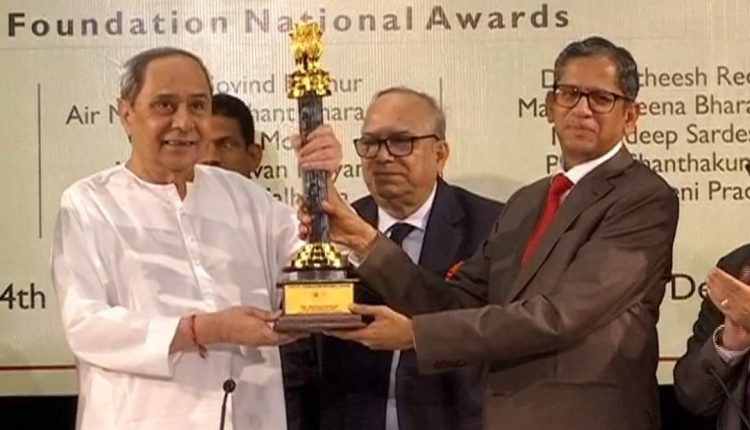 Bhubaneswar: Chief Minister Naveen Patnaik on Sunday dedicated his Lifetime Achievement Award, conferred by Capital Foundation Society, to 4.5 crore people of Odisha, who he said have continuously been blessing him to serve them for the past 22 years.

“The faith they have in me is the biggest inspiration to work towards an empowered Odisha. Odisha has come a long way in the last 22 years. After the supercyclone of 1999 who would have thought that Odisha will set global benchmarks in disaster management and get awarded by the United Nations? Odisha known for ‘poverty’ is now known for the fastest ‘poverty reduction’ in our country,” Naveen said in his speech after being presented the award by former CJI N V Ramana in New Delhi.

He further said that the governance model of the state is rooted in the empowerment of women. “Misson Sakti is something which we are truly proud of. Similarly, empowerment of tribal communities has always been close to my heart and Odisha leads the country in providing land rights under the Forest Dwellers Act. More than half a million tribal girls study in our hostels.
Farmers have always been the backbone of our state and their hard work has fetched the state the Krishi Karman award four times. Odisha is the only state to have doubled farmers’ incomes,” he said.

Stating that Odisha produces the maximum Steel and Aluminium for the country, he said that steel production has increased by nearly 10 times in the last 2 decades and this has helped the country during the COVID crisis. “Odisha supplied life-saving oxygen to 17 states during the pandemic. In the manufacturing sector, Odisha attracts the maximum investment in the country,” he said.

Naveen also spoke about the honour of hosting the Hockey World Cup twice in a row. “By setting up high-performance centres in various sports, Odisha the sports capital of India has set standards for other states to follow,” he said.

“Skilled in Odisha is a brand which not just Odisha but the country is proud of. Land rights for slum dwellers in urban areas made global urban planners rethink and have a serious look at our model of empowering slum dwellers.”

“Our path-breaking health initiative ‘Biju Swasthya Kalyan Yojana’ provides near-universal health assurance to more than 80% of people of Odisha. Our 5T principles and MO Sarakar initiatives have strengthened people’s faith in professional governance with a humane face,” he added.

Naveen also thanked the Foundation for recognizing and appreciating the good work happening in various sectors. “For more than three decades now the Foundation has provided a platform for various opinion makers to voice their views freely thus contributing to overall governance. I feel honoured that I have been chosen for the Lifetime Achievement Award by the Capital Foundation,” he said.

He further said that the award will be to see an empowered and spirited Odisha claiming her place in the sun. “We are on the right path and by Lord Jagannath’s grace and the support of our people, we shall get there soon. I once again thank Capital Foundation for bestowing this great honour on Odisha and her people,” he added.