Linguistic Contortion Of A Multicultural Evening 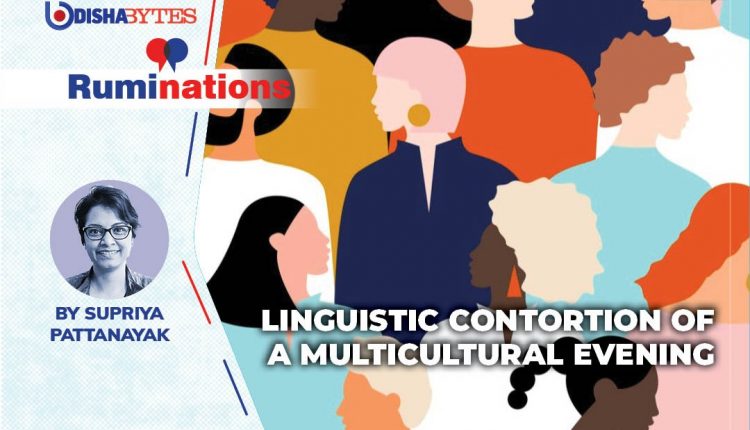 With reducing COVID rates and increasing vaccine uptake, life is gradually limping back to normalcy. So recently we had the EMEA (European Middle East & Africa) team meeting after nearly two years. Whilst we video call or chat frequently, most of us know those are restrictive to just work associated topics and lack the personal touch needed to build relationships. The day itself was full of successful business meetings with a multinational team spread across more than a dozen countries. The discussion was intense and vocal with no dearth of words. The evening however proved to be a different story.

It was supposed to be about having a generic informal conversation over dinner with boisterous team building. In reality, the conversation was initially stilted, peppered with pregnant pauses and requests for multiple repetitions. Given the varied native tongue of the team and consequent English accents, this was no surprise. It was interesting to see the struggles many of us had over a simple dinner chit chat, after spending almost a full day skillfully navigating business topics with verbal dexterity. It made me wonder about the reasons for the change of pace in communication.

There are possibly many facets to this situation. The most obvious reason could be the varying degree of proficiency in English. Across the world, English is generally viewed as the lingua franca, a language that is adopted as a common language between speakers whose native languages are different. Some learn it as a first while others learn it as a second or even a third language, independent of the country of origin. However, each person at the table was pretty comfortable with the literal meaning of the words or the denotations. So proficiency was not much of an issue in this case. Everyone understood the words per se. What stood out most was the accent and the context of the words.

Everyone develops some form of accent based on where and how they learn the language. This can be difficult to understand, especially when many are spoken simultaneously. In this case, people were asked to repeat and occasionally even spell them, to get it right. Meanwhile, my French colleague was trying hard to enunciate his “H” which is usually silent in French. So his “How” was an “ow” and his active “th” sounded like a “z” and his passive “th” was an “s”. The shouts of “oh right, of course” by the listener and a look of relief on the speaker’s face, upon rightful comprehension, was hilarious to watch.

Once we went past the accent there was the case of understanding the context. An informal conversation is not about facts but about expressing feelings. It is generally easy to speak fluently at work on structured topics as we are knowledgeable and comfortable about it but impromptu talk is a different ballgame. We usually need to express the sentiment behind the word, and connotation along with local phrases go a long way in conveying the meaning. As they are non-standard and mostly area-specific it is sometimes lost in translation to non-native speakers who mostly take it as denotation or simply misunderstand it.

At one point my wonderful French colleague I had mentioned earlier, after trying to translate an idiom and failing to convey its meaning, gave up and walked out to take a break. He was exhausted from the constant mental translations to English he needed to do. Meanwhile, a Britisher describing a to do situation ended it with “do this … and Bob’s your Uncle.” The confused look on his audience’s face made him explain that it was equivalent to “there you go” or “Et voila!” and had nothing to do with any Bob. Someone else mentioned they were “pissed” as in angry but others thought he was drunk, again a very British connotation, and asked him what and when did he drink so much.

It reminded me of the time a US-based friend of mine asked his very British niece if she wanted to change her pants before they went out. He meant her trousers of course but as pants generally refer to ladies underwear in the UK, she was shocked that he could see hers and ran to the bathroom to check them out.

The case of preference for a particular word over another, like say Aubergines instead of Brinjal or Eggplant is widespread. My Dad learnt it the hard way when we tried to buy some “Ladies’ fingers” but struggled to get his message across to the shopkeeper until someone pointed out that it was called “Okra” in the UK.

Another aspect of the problem is the knowledge or rather the lack thereof, of local cultural references. When someone used an expression with a geographical reference, we got a bit lost as we had no clue what that area denoted. The solution is to try and describe the meaning but translating an idiom lessens or loses its impact.

All these are common issues while learning a foreign language. Despite our best efforts it is easy to learn the denotations rather than the connotations from a faraway land. And if the language is widely spoken, like English, each area has its own version. When we interact with people from other regions we struggle to communicate like a native and although sometimes hilarious, it can be socially limiting or even embarrassing.

To counter this there is a growing trend amongst educational institutions to go for immersive learning. It is done via multiple methods like pairing with native speakers or hearing, speaking and learning the language in everyday contexts and experiencing it in familiar surroundings. In addition to this, there are exchange programmes where students go and stay in the respective countries, preferably with local families, for 6 to 12 weeks to get exposure to the local culture and context. Say someone learning Spanish gets to live in Spain for at least 6 to 8 weeks to help refine the command over the language and it goes a long way in appreciating the local contexts and references too.

Ultimately, even though the denotations may be universal, the connotations are mostly regional. So where and how we learn the language will always colour our pronunciation, vocabulary and usage. Exposure to mediums of entertainment like movies and television along with books may widen our understanding but there will be instances where we may struggle to understand the frame of reference.

However, our accent and connotations make us unique. The idea that one is better than the other is pretty archaic in today’s global multicultural society which is not just diverse but accepting. Being true to oneself, speaking with confidence, putting in a bit of effort to enunciate our words and listening with patience goes a long way in having a good and often hilarious discussion.

As we learnt at our table, all the confusion with language caused a good laugh, lightened the mood and helped us bond better. In fact, the variety added spice and made it an interesting and memorable day.

Why Does Happiness Elude Us?