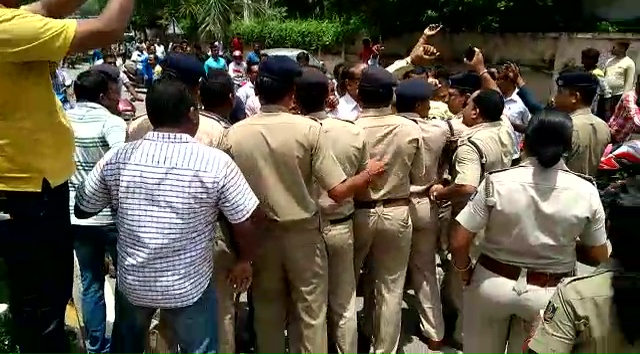 Sambalpur: Tension prevailed in Burla on Saturday after irate locals clashed with police and gheraoed the police station demanding immediate action against those involved in the attack on Veer Surendra Sai Institute of Medical Sciences and Research (VIMSAR) director Dr. Ashwini Pujahari the previous night.
The local residents termed the attack as a ‘conspiracy’ by few professors, doctors and postgraduate students with vested interest. A scuffle ensued when they attempted to barge into the hospital and were stopped by the cops.
The VIMSAR director lodged a written complaint at the Burla police station later in the day.
According to reports, more than 100 PG students arrived at Pujahari’s residence around 11.30 pm on Friday and tried to break open the gate besides hurling abuses. They later pelted the house with stones.
It is alleged that Pujahari’s recent sting operation against a few doctors of VIMSAR has not gone down well with his opponents. He had caught two doctors ‘red handed’ attending to patients privately during duty hours. Subsequently, associate Professor Gautam Satpathy was suspended for dereliction of duty on July 17.
Adequate police force has been deployed at the director’s residence and the VIMSAR campus in the wake of the Friday incident.