Lok Sabha Sets A Record During Debate On Railways 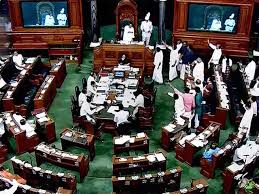 Lok Sabha discussed the demand for grants to the Ministry of Railways till 11.58 pm on Thursday, PTI reported.

Parliamentary Affairs Minister Prahlad Joshi claimed it was the first time in almost 18 years that the Lower House had discussed a matter for this long. “It is a record,” he said.

Almost 100 members participated in the debate, which started in the afternoon. Railway Minister Piyush Goyal is expected to reply to the debate on Friday afternoon, after which the demand for grants will be put to vote.

During the debate, the Opposition accused the Central government of attempting to sell off Indian Railways’ assets instead of focusing on services.

However, the ruling BJP replied that the ministry was breaking new ground every day, especially in areas such as infrastructure and safety.