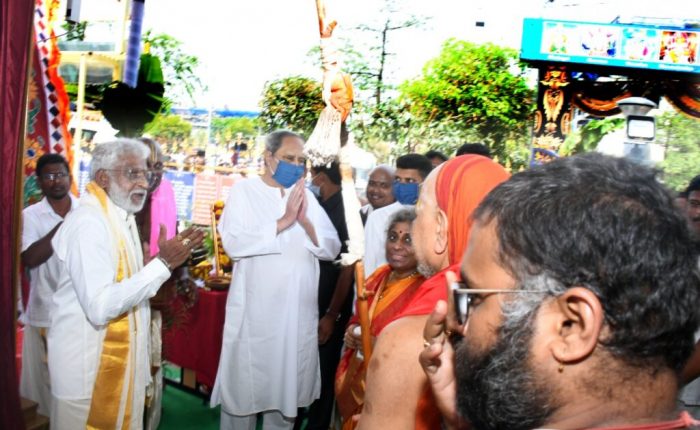 Terming it as a blessing of the universal Lord, Harichandan said thousands of people from Odisha visit Lord Balaji temple in Tirupati every year. “After the setting up of the temple in Bhubaneswar, devotees will have the opportunity to offer their prayers here only. This has facilitated those devotees who could not make their pilgrimage to Tirumala due to their age, health, finance and any other reasons,” said Harichandan.

Bhubaneswar MP Aparajita Sarangi was among the several dignitaries inaugurated for the grand event.

TTD temples are being built across the country.  Temple have been built in Visakhapatnam, Kanyakumari and another is in Jammu & Kashmir, said TTD Chairman YV Subba Reddy.

Reddy said, as part of the chief agenda of protection and propagation of Hindu Sanatana Dharma, Tirumala Tirupati Devasthanams (TTD) has so far constructed 501 temples in the backward areas across and another 1,130 temples are under way.

He also informed that under the instructions of Andhra Pradesh Chief Minister YS Jaganmohan Reddy, TTD has been providing them free darshan of Sri Venkateswara during important occasions.

The rituals began on Saturday with “Ankurarpanam” (seed sowing ritual) at the new temple complex, followed by Mahasamprokshanam rituals at the temple on Sunday.

A series of agamic rituals were performed on Saturday. Majeti Munaiah, former general manager at Odisha state civil supplies corporation,
Bhubaneswar along with his wife donated a Salagrama Haram to the
deity on Sunday.

The sacred jewel weighed around 2.28kg wrapped in around 670
grams of silver. All the 54 Saligramas (holy stones believed to be non-anthropomorphic representation of Lord Vishnu) are the original and precious ones that were brought from banks of Kali Gandaki river at Muktinath in Nepal which are considered to be most auspicious, stated reports  in Times Of India.

IMD Forecast: Temperature Likely To Go Up In Odisha; Know Movement Of Monsoon