Madhya Pradesh To Take Back Tigress Sundari From Odisha In A Month: NTCA 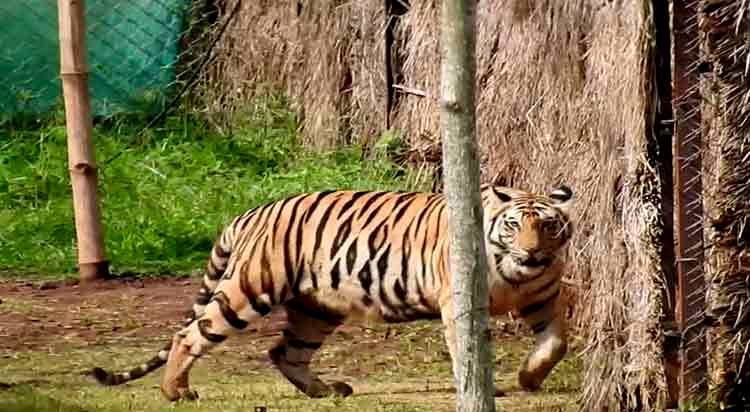 Bhubaneswar: Following a fresh directive by the National Tiger Conservation Authority (NTCA), the Madhya Pradesh government will take back Tigress Sundari from Odisha within a month.

Additional Director General of NTCA, Anup Nayak said since inter-state tiger translocation has been put on hold, there is no point in keeping the tigress in Satkosia sanctuary. In this context, NTCA wrote to the Madhya Pradesh government to take back the tigress to restore its re-wilding nature.

“Acting on the directive, a team of wildlife specialists from Madhya Pradesh had gone to Satkosia to observe the behaviour of the tigress inside the enclosure and the report of the team received by the NTCA clearly reflects the failure of the state Forest officials of Satkosia. The report states that the re-wilding nature of the tigress has completely changed and she is now behaving like a pet inside the enclosure. Moreover, the tigress has gained excess weight she is being provided with pork,” Nayak pointed out.

The NTCA official informed that the Madhya Pradesh government has begun the process to rehabilitate Sundari.

“In Madhya Pradesh, there are tiger rehabilitation centres in Bandhavgarh and Kanha tiger reserves. Out of two rehabilitation centres in Kanha tiger reserve, one of the centres has been vacated for Sundari where efforts will be made to restore her re-wilding nature. As there is a delay in the shifting of the tigress due to the lockdown, the tigress will be brought back from Odisha by the end of July,” he said.

Asked about the decision to bring a tiger couple from the neighbouring state to Satkosia, Nayak said that until the Odisha Forest Department ensures the trust of people living in the sanctuary periphery, expansion of the prey base area of the sanctuary and the foolproof security to these big cats, the chances of releasing these predators in the wild of the sanctuary is remote.

The Forest Department, however, was forced to relocate the big cat into a special rehabilitation enclosure on November 6 after the death of two persons and a bullock at Baghamunda and Tainsi villages inside the reserve area allegedly after being attacked by the tigress sparked protests. Since then, the tigress has been kept inside the enclosure.