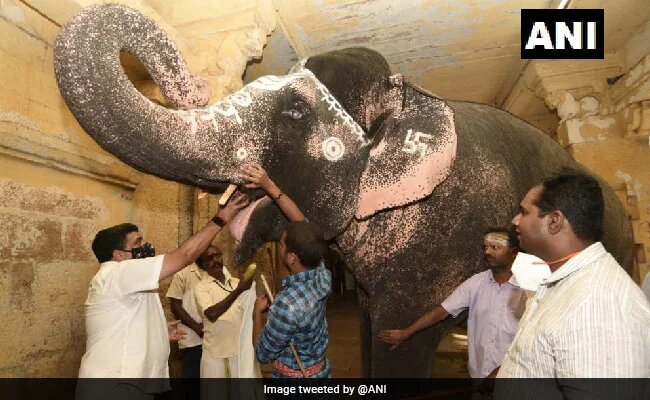 Chennai: A team of veterinary doctors has come from Thailand to examine Parvati, a 24-year-old elephant at Meenakshi Sundareswarar Temple in Tamil Nadu’s Madurai who has been suffering from cataract in her eyes.  The team, which arrived on Sunday, is led by Nikorn Thongthip from the veterinary medicine wing of Thailand’s Kasetsart University.

News agency ANI shared pictures of Parvati being examined by doctors. The elephant has been suffering for quite some time, reported  ANI.

“A 7-member veterinary team led by Thailand’s Nikron Thongi, a veterinary doctor, visited Madurai’s Meenakshi Amman Temple to treat elephant Parvati for cataract, who has been suffering from the disease for quite some, as per district administration,” the agency reported.

“I noticed the problem on her left eye first about six years back. Now, the right eye has been affected too. We have been treating her with the best doctors and medical facilities so far. We will continue to do so,” State Finance Minister Dr P Thiaga Rajan was quoted as saying by The Hindu.

“On discussing the possibility of cataract surgery, we were told by the doctors that it would be challenging to prevent further damages during the post-surgery period. Doctors said that proper treatment can be given to prevent further aggravation of the disease. However, there has been no major improvement in the elephant’s eyesight,” the minister said.