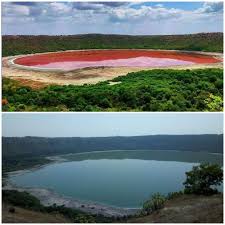 Nagpur: In a mysterious turn of events, a 50,000-year-old lake in Maharashtra’s Buldhana has turned pink over the past one week. The strange phenomenon has sparked theories and concerns among spectators and experts.

This is the world’s third-largest crater formed because of a meteorite strike and is located nearly 500 km off downtown Mumbai. Buldhana District Collector Suman Rawat Chandra took to social media to share astonishing pics of the lake.

“Lonar Lake currently…Wonders of Nature…Looks like algae bloom primarily, but microbiologists can tell better…,” she wrote on Twitter.

“There are algae in the water body. The salinity and algae can be responsible for this change,” a member of the Lonar Lake Conservation and Development Committee, Gajanan Kharat, was quoted as saying by PTI. The lake is a notified national geo-heritage monument, which has saline water with a pH of 10.5. “There is no oxygen below one meter of the lake’s water surface. There is an example of a lake in Iran, where water becomes reddish due to an increase in salinity,” the official further told PTI.

Meanwhile, the forest department has been asked to collect a sample of the water and research the phenomena behind the changing colour of the lake.

The Maharashtra Tourism Development Corporation also shared photos of the strange phenomenon. “From Green to Pink; Lonar Crater Lake has changed its colour,” it wrote in a post on Twitter.

Though it is not the first time that the colour change has happened in this lake,  it is more dazzling this time. The change, however, from the normal greenish to reddish has gone unexplained.

Amitabh Bachchan To Lend His Voice For Google Maps In India?

Watch Out Online Buyers! Police To Keep Track Of People Who…