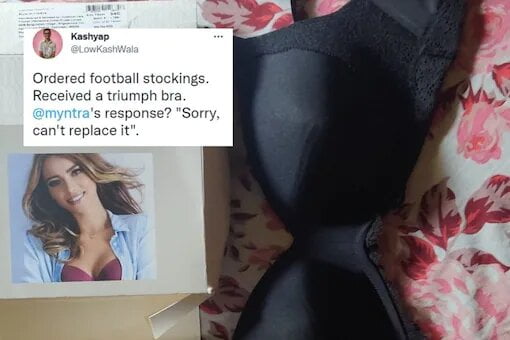 New Delhi: A man was quite taken aback, no, shocked, when he opened his Myntra delivery. For, inside the packet, was not the pair of football socks he had ordered but a bra!

And that’s not all! When Kashyap Swaroop raised a query for a refund, he was greeted with a ‘product not returnable’ message.

Kashyap took to Twitter to share the incident along with screenshots of his conversation with the customer care section of Myntra. He also included a picture of the received bra in the tweet.

Little surprise that the Tweet caught the attention of netizens. Myntra, on the other hand, took note of the incident issued a tweet of apology under his post.

The incident led to a laughter riot on the internet with hilarious responses. While some were surprised at how the shopping app was able to say that a botched-up order was “tamper-proof”, others simply shared funny puns regarding the incident. Many users also sympathised with the woman who apparently received the socks Kashyap ordered.