Mandi Issue: Naveen Comes Out Of His House To Meet BJP Delegation 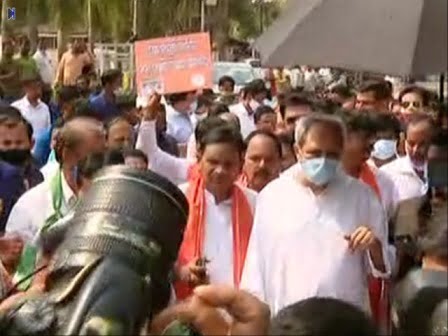 Bhubaneswar: As pandemonium continued to prevail in Odisha Assembly for the sixth day on the issue of plight of farmers who are not able to sell their paddy at several mandis, the Opposition BJP members on Thursday left the Assembly to meet Chief Minister Naveen Patnaik to resolve the impasse.

The BJP members led by the leader of the Opposition Pradipta Naik, Opposition chief whip Mohan Majhi, Jayanarayan Mishra, Subash Panigrahi and Jayant Sarangi arrived at the Loka Seva Bhawan to meet the Chief Minister. But, on finding him absent there, they went to Naveen Niwas to meet him. As soon as they arrived there, the security personnel closed the main gate.

At this, the BJP members staged a dharna in front of the residence of the Chief Minister despite the request by the BJD leaders to withdraw the dharna.

Amid the protest, the Chief Minister arrived at the dharna and invited the BJP members to his house for a meeting.

This is for the first time in the history of Odisha politics where the Chief Minister has personally invited the Opposition for a meeting at his house.

Those Above 65 More Likely To Have COVID-19 Reinfection, Says Study