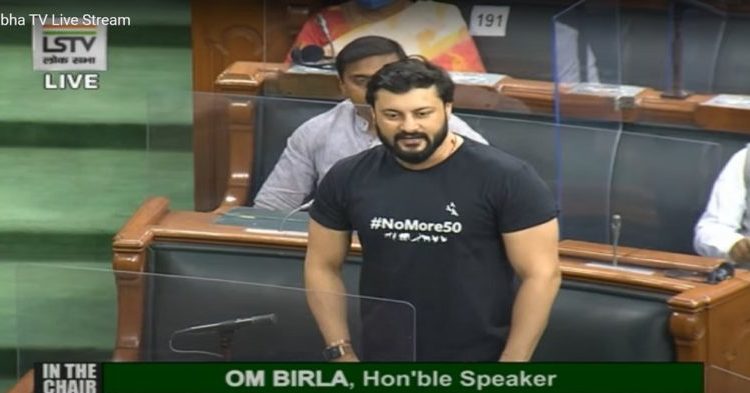 Bhubaneswar: Actor and MP Anubhav Mohanty is known for his love for animals.

After the recent incident of rape of street dogs by an elderly man in Mumbai, the MP has once again raised his voice for the voiceless, this time in Parliament.

Anubhav, who represents Kendrapara constituency in Odisha, appeared in the Lok Sabha in a black tee with the message #NoMore50 on March 16.

Ever since, a few other young MPs like Prince Raj Paswan, who share the passion for animals, have been seeking amendments to the Prevention of Cruelty to Animals Act and stringent punishment for violators.

The actor also took to social media and microblogging sites seeking justice for mute animals and stringent punishment for those subjecting them to cruelty.

His instant act of compassion for the animals also received a pat and appreciation from animal activists across the country, including the likes of Gauri Maulekhi, a protege of Maneka Gandhi. Maulekhi has also been demanding amendment to the Prevention of Cruelty to Animals Act.

The actor also requested people to “trend the hashtag everywhere and be the voice of the voiceless/non-voters.”

Organisations like Change.org India too praised the MP for coming forward and moving a petition in Parliament urging the government to increase the penalty for cruelty to animals.

MP @AnubhavMohanty_ supports the #NoMore50 petition in parliament that is urging the government to increase the penalty for cruelty to animals. https://t.co/8x2h5zkTaw

The MP can be heard saying in a LS TV interview that the Act has been in place since 1960 and Rs 50 fine was decided then, but several  decades later the amount is too meagre and anyone gets away easily. The fine amount should be hiked and punishment should also be stringent to an extent which would impose fear in the minds of people who consider animals as toys.

“We humans should be the voice of the voiceless and ensure that the animals get justice,” said the MP, adding that this was his personal view and not a political agenda.

Meanwhile, Prince Raj Paswan, an MP from Bihar, also sought amendment to the Act saying Rs 50 fine should retire considering that even a person retires from work life at the age of 60.

In India, being cruel to animals is a crime, but laws for it are not stringent. A person could mutilate stray dogs, whip a horse or even starve their own pet and get off with paying a fine as little as Rs 10 or as much as Rs 50.

These penalties of Rs 10 to Rs 50 were determined when the Prevention of Cruelty to Animals Act was formed in 1960, and the figures have not changed in the 56 years since then. While the amount then was high enough to instil fear, the amount holds little value now and anybody can escape punishments easily.

Now, a group of animal welfare organisations and activists are on their way to ensure that the law is amended so that harsher punishments are imposed on those who harm animals.

Mandi Issue: Naveen Comes Out Of His House To Meet BJP Delegation

Should India Expand Its COVID-19 Vaccination Programme To Include All?