Bhubaneswar: Do you know that there is only one aberrantly coloured Grey-headed swamphen in the entire world? And do you know where you can see it?

The Grey-headed swamphen or Purple swamphen (Porphyrio poliocephalus) is a common sight across India, flocking large marshes and reeds bordering lakes. Purple-blue in colour and as large as a hen, it has a large red bill, red frontal shield and white undertail covers.

But in a unique finding, a three-member team from Odisha has reported the sighting of an aberrantly coloured Grey-headed swamphen — the only one in the world — in Mangalajodi.

It has an all-white plumage with normal-coloured eyes.

The sighting of the diluted Grey-headed swamphen is published in the prestigious Wilson Journal of Ornithology ‘Online Early Articles’ (March 3, 2022). The study is titled “First report of diluted plumage in Grey-headed swamphen (Porphyrio poliocephalus) and a review of colour aberrations in swamphens”.

Aberrant plumage coloration is not uncommon in birds, but birders and ornithologists face difficulties sorting among its different types in wild birds.

“Interestingly, this specific bird was photographed by some other photographers who were just happy with posting it on Facebook without proper identification for over a year. However, we thought it in a bigger way to publish it in a very reputed journal to put Mangalajodi and Odisha on the international map,” Subhendu Mallik, the article’s co-author, said.

“Identifying plumage aberrations in the field can be extremely difficult because of many factors such as distance to the bird, movements, proper lighting and whether the bird is already strongly bleached by the light,” he added.

He explained that a normal bird can have a white-colour plumage because of five types of aberrations — Albino, Leucistic, Ino, Dilution and Progressive greying. “First, we thought it to be an Albino when we first spotted it in 2020 after seeing the reddish eyes and white plumage. However, as we researched further, we found that the all-white plumage in the Grey-headed swamphen is due to Dilution. The bird would have hatched as a normal-coloured chick, but as it grew older its colour faded to white,” he said.

Bird guide Madhu Behera guided the team to the bird so that they could photograph it.

The dilute Gray-headed swamphen likely attained adulthood because of its normal eyesight. Had it been Albino, it would not have survived till adulthood due to poor eyesight. “Albino birds are rarely seen in the wild because the absence of melanin in the eyes makes them highly sensitive to light. With a poor depth of vision, the bird’s ability to forage is minimised and thus Albino birds usually die quickly after fledging,” said Ashutosh Mallik.

“The survival of this aberrantly plumaged swamphen could also be attributed to the environmental conditions such as the abundance of food at Mangalajodi, a well-preserved habitat and one of the best ecotourism destinations in Odisha,” said Shakti Nanda, who photographed the spectacular bird. 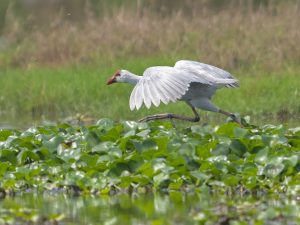 Row Over AC Cabin In Hospital For Arrested Odisha MLA; Check What Happened