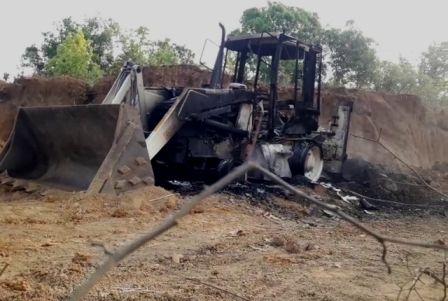 Malkangiri: Combing operations have been intensified along the Malkangiri-Chhattisgarh border after armed Maoists allegedly killed a man in Kukurkund village under Mathili police limits on Monday afternoon.

The dead man, Gupta Swain, is related to a contractor who had bagged the tender for construction of a road from Kukurkund to Temrupalli under the Pradhan Mantri Gram Sadak Yojana.

Sources said armed Maoists barged into Kukurkund village in the afternoon. They took out diesel from a JCB machine and set it on fire. They also torched a truck near the contractor’s camp. The rebels went inside a camp and thrashed labourers there. They then dragged Swain out and shot him dead.

Before fleeing, the Maoists left some posters voicing their protest against construction of the road. They alleged the government was constructing the road to loot minerals from the area. Going by the posters, the violence seems to be the handiwork of the so-called Bastar divisional committee of the outlawed CPI-Maoist.

Malkangiri superintendent of police Jagmohan Meena said the police are yet to reach the area. “Since the incident took place in a remote area, there is a possibility the Maoists planted explosives on the way to ambush police on their way to the village. We have to take precaution and adhere to standard operating procedure (SOP) while reaching the village,” he said.

He, however, said that BSF forces have begun combing operations in the area to flush out the Maoists.

Family members of Gupta Swain arrived at Mathili police station on Tuesday. Till reports last came, they were waiting to receive the body from the police station after post-mortem.