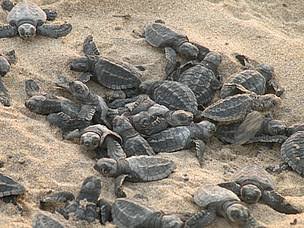 Rajnagar (Kendrapara): The process of mass nesting of the endangered Olive Ridley turtles has begun at Gahirmatha coast under Rajnagar Forest Range in Odisha’s Kendrapara district.

Sources in the Forest department said while about 200 Ridley turtles were sighted at Nasi-2 area in Gahirmatha in the evening on March 5, about 5640 turtles were found congregated in the area in the night on March 6.

A senior Forest official said that the endangered turtles after arriving at the coast came in masse to the sand dunes of Nasi-2 and began mass nesting which went on till sunrise.

Taking note of the mass nesting, the search lights of the missile launching centre situated about 200 metres from the Nasi-2 have been switched off by the concerned authorities following the instruction by the Forest department.

For the protection of the Ridley turtles and the eggs, the Forest department has taken several measures.

A team of Forest officials comprising a Range Officer, Deputy Ranger, Forester and 20 Forest guards has kept a close watch on the nesting area. The team is guarding the Gahirmatha coastline with three trawlers and two power boats to ensure no illegal trawling and no intrusion of sea pirates in the prohibited area during the mass nesting.

It is worthwhile here to mention that there was no mass nesting of the Ridley turtles through were sighted in Gahirmatha in 1996-97, 1997-98, 2001-02, 2007-08 and 2013-14. Following the mass death of these rare marine species in thousands during the aforesaid years, the environmentalists were in doubt whether the mass nesting would take place in future at Gahirmatha.

However, they are delighted with the onset of the mass nesting of these turtles this year even though the process has been delayed as compared to previous years.