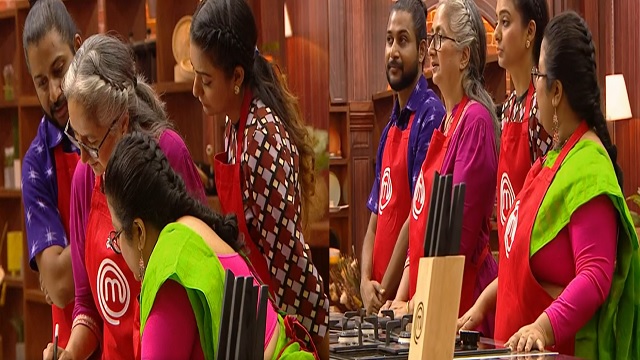 His winning dish was a prawn item with coconut. It was the Bhubaneswar-based Avinash’s third Odia dish on the show.

As a precursor challenge, the judges asked all 12 participants to assemble the kitchen set-up before beginning the task for the day. Deepa Chauhan chose Avinash, Dyuti Banerjee and Priya Vijan in her team, and they were given red aprons.

Two other teams, consisting of four participants each, were formed.

The task for Wednesday’s episode was to cook a four-course meal — starter, soup, main course and dessert — in 90 minutes.

The main theme for Team Red was finding the roots through ‘silk routes’, where they attempted to showcase delicacies from Sindh to Bengal.

After tasting Avinash’s main course dish, which he made using prawn, coconut, asafoetida (hing) and ginger, chef Ranvir Brar said: “It is an honest and refreshing dish. It delivers exactly what the name suggests.”

“Tu idhar kya kar raha hai, chal mere sath mere restaurant me (What are you doing here, come along with me to my restaurant),” Vikas told Avinash.

With the main course dish by Avinash and dessert by Dyuti being chosen as the best by all three judges, Team Red won the challenge to be safe from elimination.

Avinash was recently selected in the top 16 after impressing the judges with ‘Flavours of Tatini’, which he named after his maternal grandmother.

“I learnt the dish from my grandmother who used to make it when I was a kid. Now, when my close ones taste the same dish, I am told I have started cooking it better than grandmother, which makes me feel proud,” Avinash, a popular food blogger on Instagram by the name of ‘Bhukkad Insan’, told Odisha Bytes.

Earlier, when he presented a traditional Odia dish ‘Gaintha Pitha’, he innovated by using blue pea flowers to extract the colour and flavoured it with Pandan leaves. He dipped it with coral Jasmine (Parijat) infused milk and Indian almonds.

“I wanted to represent my state and its festivals. As ‘Gaintha Pitha’ is a dish that is made in every household during any festive day, I decided to make it by creating floral designs,” said the 35-year-old home cook.

Avinash, who used to work as an agriculture officer for Odisha government, left his job to pursue his PhD in horticulture with floriculture and landscape gardening as specialisation at OUAT, Bhubaneswar.

“I was born and brought up outside Odisha and have grown up eating diversified food, mostly Punjabi cuisine. I learnt the Odia delicacies after my family settled in Bhubaneswar,” he said.

Being a foodie himself, Avinash has documented traditional recipes of many Odia pithas and the history behind them.

Notably, Department of Handloom and Textiles sponsored some handloom shirts to Avinash after his promo was released. “I am also trying to promote the handloom of our state through the show,” he said.