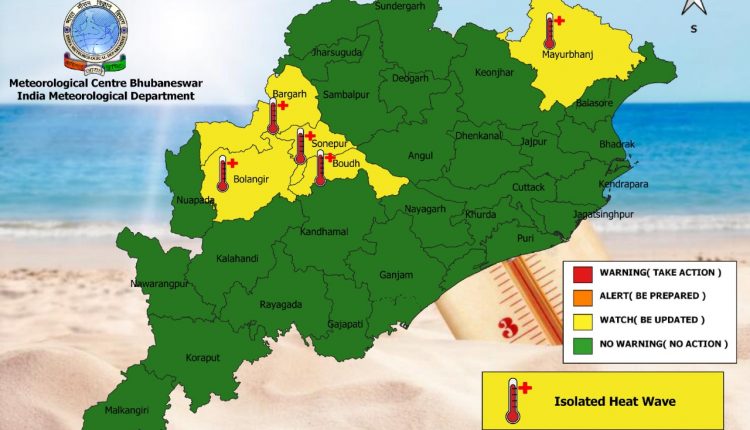 Bhubaneswar: Even as four urban places in the states recorded temperature of 41 degree Celsius or more on Tuesday, the IMD forecast heatwave condition in 5 districts on Wednesday.

Titlagarh was the hottest place in the state with mercury shooting up to 41.5 degree Celsius on Tuesday from 40.5 degree on Monday. It was followed by two other western Odisha towns as Balangir recorded 41.4 degree Celsius and Sonepur 41.3 degree.

Boudh and Baripada reported 41 degree Celsius each, while Bhawanipatna and Sambalpur registered 40.2 degree during the period.

The twin cities of Bhubaneswar and Cuttack recorded slight decline in the day temperature with both places registering 36.5 degree Celsius each. The seaside town of Gopalpur continued to record the lowest temperature in the state at 30.5 degree Celsius.

In its evening bulletin on Tuesday, the regional office of India Meteorological department (IMD), here, stated that heatwave condition is likely to occur at one or two places in Mayurbhanj, Boudh, Sonepur, Balangir and Bargarh district from 8.30 am of Wednesday to 8.30 am of Thursday.

The IMD said heat will be tolerable for general public but expressed concern about vulnerable people including infants, elderly and sick people. It advised the vulnerable people to take precautionary measures while going outside during midday.

Russia Says Will Drastically Scale Down Attacks In Kyiv, Chernihiv

Know The Indian-American ‘Raj’, Who Is The New CEO of FedEx