Mercury Plummets Below 15°C At 15 Places In Odisha; Check Here 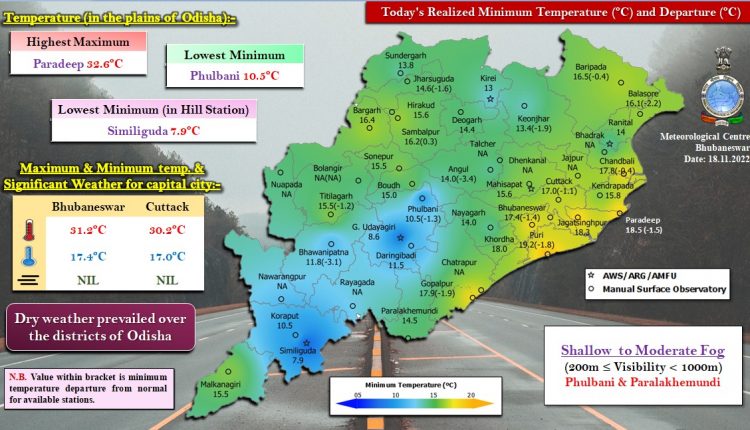 The night temperature plummeted below 15 degree Celsius at 15 places, including Kirei in Sundargarh (13) and Ranital in Bhadark (14). The twin cities of Bhubaneswar and Cuttack recorded 17.4 degree Celsius and 17 degree Celsius respectively.

Check the minimum temperature at other places in the state.

According to the IMD, the state will continue to experience a drop in night temperature, which might increase slightly rise again by Sunday. Besides, some parts of Ganjam, Gajapati, Kandhamal, Rayagada, Malkangiri and Koraput are likely to witness light to moderate rain for a day or two from November 21.

It has also forecast shallow to moderate fog at one or two places in Kalahandi, Kandhamal, Gajapati and Rayagada till 8.30 am on November 19. “The minimum temperature will remain 2-3 degree below normal during the next 2-3 days and witness a slight increase by 2 degrees thereafter,” it added.

Meanwhile, the fresh low-pressure area over the Bay of Bengal and its neighbourhood, which is likely to concentrate into a depression by Saturday, will be no direct impact on the state.