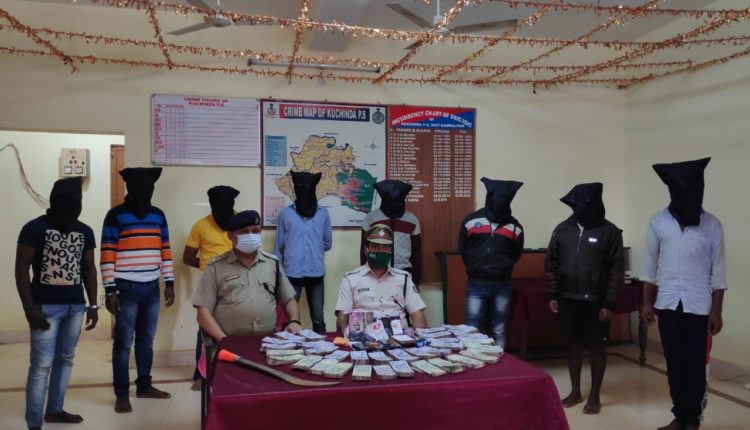 Sambalpur: Police on Thursday arrested nine persons, including a minor, for allegedly looting over Rs 35 lakh in cash belonging to Union Bank’s Laimura branch under Kuchinda police limits in Sambalpur district on November 9.

The accused have been identified as Gobinda Kisan (24), Dillip Bag (22), Biswanath Kisan (35) and Amaresh Kisan (25) of Deogarh district, Sumanta Lakra (26) and Chitrasen Lakra (22) of Sundargarh, Rohita Naik (34) of Dhenkanal, Umesh Sahu (32) of Kendrapada district and the minor from Sundargarh district.

Police have also seized Rs 10 lakh in cash, a car and five bikes from the accused.

The incident took place in the afternoon when the assistant manager and a peon of the Union Bank branch at Laimura were returning after collecting Rs 35,41,000 in cash from the bank’s Sambalpur branch in a private vehicle.

Suddenly, two bike-borne miscreants intercepted the vehicle near Thuntipipal village. Soon, four others sorrounded the vehicle and looted the cash. Before fleeing, the miscreants also took away the mobile phones and wallets of the driver and bank official as well as the key of the vehicle.