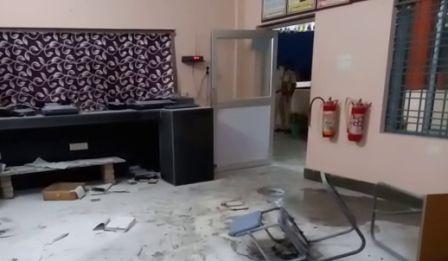 Nayagarh: Police are on the hunt for some youths, who allegedly ransacked the railway station in Nayagarh town and thrashed a senior official and two staff late on Sunday night.

According to sources, 11 youths were found playing DJ music in a drunken state at the railway station around 11 pm. They thrashed two Railway staffers when they asked them to vacate the place.

The station manager was also attacked with iron rods. The youths later ransacked the railway station office and set the office room on fire.

On being informed, the Town Police and the Railway Protection Force (RPF) personnel rushed to the railway station and arrested one Kanha Pradhan.

Efforts are on to nab others involved in the incident, police said.

It may be mentioned that the railway station had remained closed since March last year due to the COVID-19 pandemic. Taking advantage of this, some youths indulged in anti-social activities.

The locals alleged no action has been taken against them despite them having informed police about the same.