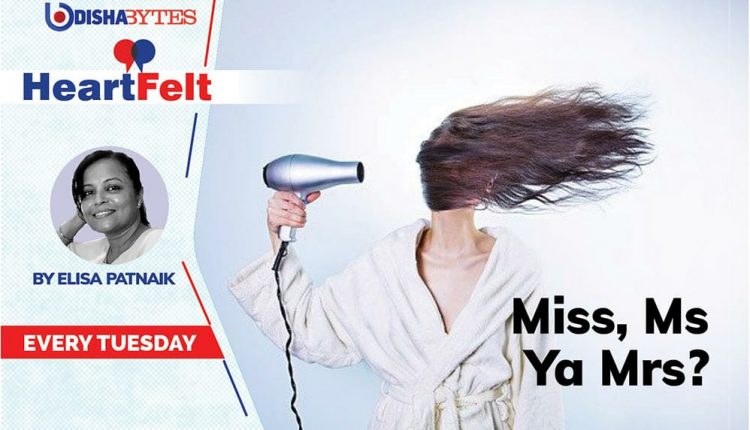 Every time I am asked or presented with options to choose a title for my name, I pause. I go through the dilemma as to which box to select – Miss, Ms or Mrs. The option appears every now and then while filling up diverse application forms, admission forms, registration forms et al.

I am sure many women harbour similar feelings. But men do not have to go through such intricacies. In fact, they have it quite easy. Married or unmarried, they do not have multiple alternatives to choose from. Being the entitled sex, they have only one single title to claim – that of a Mr. No one, and no institution, is interested in knowing about their marital status unless absolutely essential.

And then we have the Indian equivalents. Adult men are always Shri or Shriman, but the female counterpart for adult women is Shrimati meaning a married women. There is Sushri or Kumari for a young unmarried girl or woman but all women irrespective of their marital status are Shrimati! I have often felt awkward and embarrassed formally addressing women in public offices with a Shrimati especially when I am unsure if the woman concerned is single or unmarried. Or if she would like to be addressed as such.

It gets further complex when a lady’s identity is known only through the person she is married to. In several establishments like the defence and paramilitary forces and other formal institutions the wives are mostly known as Mrs so and so and there is no scope for a married woman to be a Ms with her own surname. In such cases one does not even come to know many of these ladies’ actual names but only as Mrs. X.

But, I used to secretly enjoy when few of my husband’s acquaintances from the Army who had read my bylines but did not know us well used to address my husband as Colonel Patnaik (though his surname is Parija) assuming that Patnaik was my marital surname!

Honestly, is the Ms/Mrs status really important enough to be revealed by a woman? On the contrary, some women may even want to flaunt it or find it enduring and romantic. A few may argue that the matter is a trivial one, not to warrant any attention, thought or debate. Is it really? I find categorising women thus, and the continuing practice, patriarchal. Particularly, when our male counterparts are excluded from following the same. Besides, I wonder how does a woman’s marital status impact the larger scheme of things?

It also reflects the way gender inequalities are represented in language and linguistics. Over the years, Mrs has been assumed and accepted as the linguistic equal of Mr for adults. No matter, Mrs defines a woman as a wife first and foremost, as relation to the person she is married to. It somehow means as if a Mrs is no longer her own person.

And what about women who were once married and are now divorced or widowed? Do they continue to be Mrs?

But it’s also fairly simple for men. A young unmarried guy, an elderly married man, a male president, the husband of a famous actress – could all be neutrally addressed in the same title as Mr.  It tells you nothing about the man’s marital status. So why are women classified differently with a series of honorifics which are both sexist, confusing and outdated?

In the past, the terms of address were even used to allude to a woman’s social status. A single woman with a Ms preceding her name was often looked down upon as compared to a Mrs. And now, even though with the changing times the title Mrs is considered old-fashioned not begetting similar esteem anymore, it is still in use.

It could be a matter of personal choice for many women and it’s upto them to reveal or not to reveal their marital status. But then it sets in motion a thread of tattle and raised eyebrows as to why a woman is not divulging her marital status. At times, when I have chosen a Ms prefix for my name, a few people have remarked slyly, “But you are a Mrs!’

Marital status of both women and men, if necessary, could well be documented in another category, married or unmarried. But for routine information, revealing one’s marital status to the external world is not absolutely necessary. Ms is now gradually emerging as the marriage-neutral substitute to Miss and Mrs with progressive gender-friendly institutions realising the redundancy of such typical honorifics for women.

Use of sexist language is an age-old problem and language surely needs to change with the shifting status of women in society. Gender-neutral honorifics such as Dr and Prof are being progressively used in certain professional sectors like academics and medicine. Also, women in their professional and public lives are also being increasingly addressed as Madam, a fair equivalent of Mr.

Many professional women today, who are married, use their own name preferring to use Miss over a Mrs without having to reveal their marital status. The Mrs title is gradually losing favour and flavour among liberal circles and professional and younger women. It not only smacks of a connotation of someone who is dependent upon her husband but also someone without an identity of one’s own.

On the other hand, Ms is considered as a neutral term for a woman, like Mr is to men. It doesn’t indicate if a woman is married or not and is nowadays regarded as the preferred and a progressive choice among many women. So, to be both linguistically and politically correct, many progressive and inclusive organisations are now doing away with redundant titles for women. Or simply asking women which identity they prefer.

Moving a few steps ahead, there have been other options lately, like Mx – A title that could be used by anyone or None – when some people prefer not to use any title. Anyone ready for this?

What Is New COVID Variant C.1.2 That Could Evade Vaccination? WHO Says It’s Not Spreading

The Brave And Fiercely Loyal Captain John Jacob: ‘I…

There Is A Common Face In SSR, Raj Kundra & Aryan Khan…