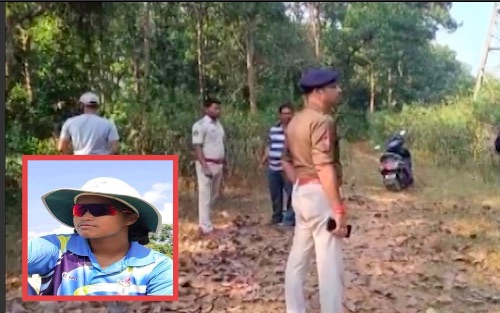 Cuttack: Woman cricketer Rajasree Swain, who had been missing since January 11, was found hanging from a tree in a forest under Gurudijhatia police limits in Odisha’s Cuttack district on Friday.

Though the reason for her death is still not clear, she was reportedly upset over not finding a place in the 16-member probables for Odisha women’s team. The Odisha team was announced on January 10.

Police sources said the 26-year-old was staying with other 24 women cricketers in a hotel at Bajrakabati Road since January 2 and had taken part in a practice-cum-training camp organised by the Odisha Cricket Association (OCA) for the selection of the state team, in an upcoming national-level cricket tournament scheduled to be held in Puducherry. A day after she could not make it to the final list, she checked out of the hotel on Wednesday and told Odisha women’s coach Pushpanjali Banerjee that she was going to Puri to meet her father while selected players had gone to a cricket field in Tangi for practice.

When she did not reach home, and her mobile phone was found switched off, Banerjee lodged a complaint at Mangalabag police station in Cuttack. Some locals, who had reportedly gone to collect firewood, spotted a scooterette and helmet on the Bramhanabast-Kapursingh forest road and informed Mangalabag police. A team of police officials rushed to the spot and started searching for her last night. She was then found hanging from a tree with the help of her dupatta (scarf).

“We will soon question her roommate, who was selected in the team, and the CCTV footage will also be verified,” said Cuttack ACP Amitav Mohapatra.

Her father and sister, however, alleged she was murdered and her body was later hanged to give an impression of suicide. They also blamed Odisha Cricket Association (OCA) and her coach for her death and said that she was intentionally omitted from the team. “The OCA authorities have killed my daughter to suppress their wrongdoings,” said her father Gunanidhi.

Amid the foul play allegation, her body recovered from a forest was found with injury marks on head and eyelid, reports said.

Rajasree was a right-arm fast medium bowler and right-handed batter.

Want To Withdraw Your PF Before Retirement? Here’s How To Do It