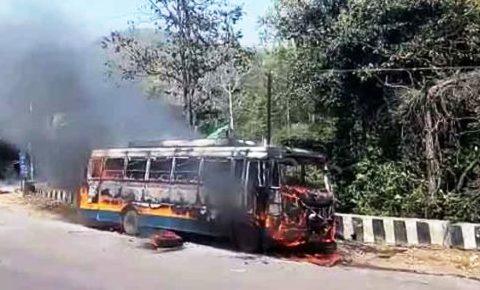 Kendrapara: A mob set a private bus on fire after it ran over a man on NH-5 in Kendrapara district on Wednesday.

According to sources, the bus was on its way to Paradip from Kolkata when it hit one Bikas Nayak, who was coming from the opposite direction, near Haladiagada village on NH-5. Bikas died on the spot.

Following this, a mob comprising around 50 people torched the bus and staged a road blockade.

Later, firefighters reached the spot and doused the fire.