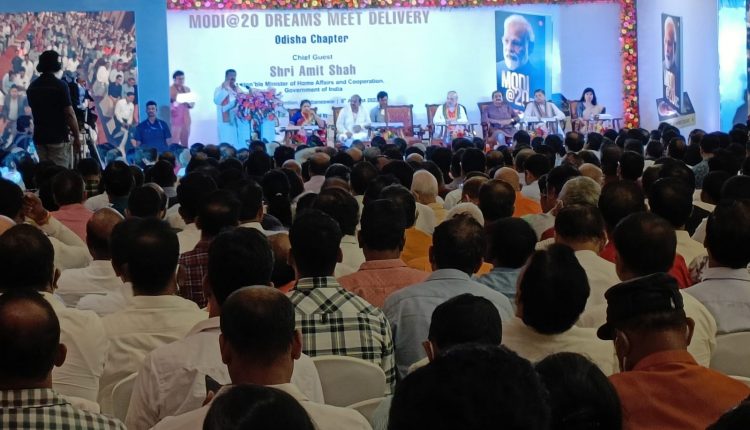 Bhubaneswar: Asserting that Prime Minister Narendra Modi has wiped out politics of dynasties and appeasement, Union Home Minister Amit Shah on Monday said people of the country are now witnessing politics of performance with a focus on good governance.

Shah was speaking after releasing ‘Odisha Chapter of Modi@20: Dreams Meet Delivery’ at a function on the concluding day of his two-day Odisha visit. The book highlights the achievements of Modi during the last 20 years as Gujarat Chief Minister and then Prime Minister.

Referring to Modi’s role in strengthening BJP, Shah said the party which was once considered as an outfit of the Hindi heartland is now in power in the north-eastern and southern states, including Karnataka. “Now BJP is also going to form government in Odisha,” he said.

“It was Narendra Modi who took concrete steps to put an end to the politics of dynasties and gave the people an opportunity to taste the fruits of the politics of performance,” the senior BJP leader said.

Emphasising that democracy got deep-rooted in the country under the leadership of Modi, he said family-oriented political parties now need to realise that the era of dynastic rule has come to an end in the country. “These parties are bound to perish if they fail to change their policy,” he said.

Coming down heavily on political parties for having adopted politics of appeasement for many years, Shah said members of particular communities and groups were given special treatment as part of vote bank politics.

However, Modi has put an end to it and no particular segment of society is now accorded special treatment or facilities be it allocation of LPG cylinders or benefits under Ayushman Bharat health insurance scheme, he said.

Claiming that the country was stung by corruption to the tune of Rs 12 lakh crore before BJP-led NDA came to power in 2014, Shah said bold steps taken by Modi has dealt a death blow to corruption and paved the way for transparency and honesty.

Noting that the countrymen were apprehensive about the functioning of the government before NDA came to power, he said the country witnessed policy paralysis and internal security was often in danger. Terrorists used to unleash terror at will killing innocent people, he said.

People’s confidence was restored after Modi became the Prime Minister, he said adding that the BJP-led government worked wholeheartedly for the uplift of the poor and downtrodden.

As Modi was always concerned about the weaker sections of society including Dalits, he took steps for making Ramnath Kovind the President and now the country has got its first tribal woman in Droupadi Murmu as the constitutional head, Shah said.

The BJP leader said Modi has proved the old saying that ‘blood is thicker than water’ as he has accepted the 130 crore people as his own forgetting about his own family. “Modi is always guided by the policy of antyodaya in order to work hard for the progress of the poor people,” he said.

Describing Modi as an able statesman and a team leader, Shah said the Prime Minister has elevated the status of India in the international sphere besides addressing major challenges faced within the country.

Whenever the country faced challenges on the borders, the government gave befitting reply to the hostile forces inside their own territory, he said.