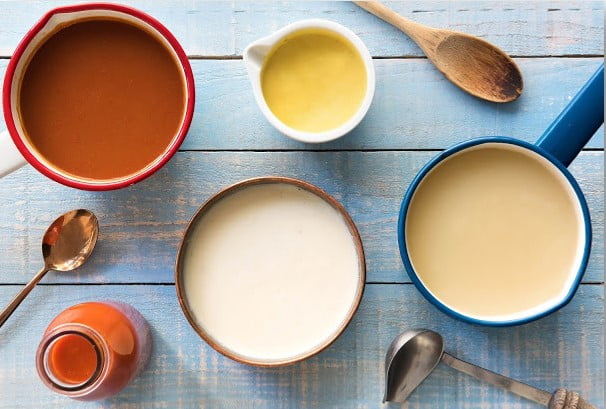 The base of all sauces originated in France, developed in the 19th century by chef Auguste Escoffier. This was the starting point for other delicious sauces that were used as a complement or accompaniment for countless dishes, including veggies, fish, meat, casseroles (one pot dish – cooked and served) and pastas.

In India we have our own chutney, but that has taken a backseat as off-the-shelves chutneys and sauces are the latest craze. Indian celebrity chefs have come out with their own range which are becoming very popular.

French cuisine had these grandiose styles of cookery, serving to the international royals and nouveau riche. These styles of cooking made the chefs during that period do some innovation – some preferred light tasty sauces and some heavy and thick. But later it took the form of lighter consistent sauce. It had the extremes of sweet and savoury. But some sauces were created to be a balance between the extremes. Thus it gave birth to the five mothers of all sauces — Béchamel, Veloute, Espagnole, Hollandaise and Tomato.

Beyond flavour, the most important element of any sauce is its ability to smother and cling to whatever it gets drizzled, dolloped, or poured on. That means making the sauce thick and stable, which is accomplished with three techniques — a roux, an emulsifier and a reduction (liquid that’s slowly cooked down until thick).

Roux is equal to flour and butter. Reduction is slow cooking of the mix for making it consistent. Emulsifier (a binder – egg) an agent which binds two elements that cannot mix on their own due to their characteristics, best examples being butter and lemon.

1. Béchamel: If you’ve tried and eaten home-cooked macaroni and cheese, a classic croquet, or lasagne, try it out with Béchamel and experience the rich creaminess. It can be made in its most basic form by just combining roux and cream, or it can be mixed with other ingredients to create new sauces by adding mustard or kasundi. This sauce can be poured over gratin, crab cakes. Have a change with Chinese dishes by adding Soy or Miso sauce.

2. Velouté: Velouté begins with a white roux, but then it gets mixed with white stock made from fish, chicken, or lamb/goat. Technically not a finished sauce, it’s used as a flavouring sauce, starting point for gravies, mushroom sauces and shrimp sauce or fish sauce – the Thai ones. Other ways which can be used are with meat kofta, or smothering it on toasted bread, or adding it to vegetarian fries. It changes the taste to a different level. 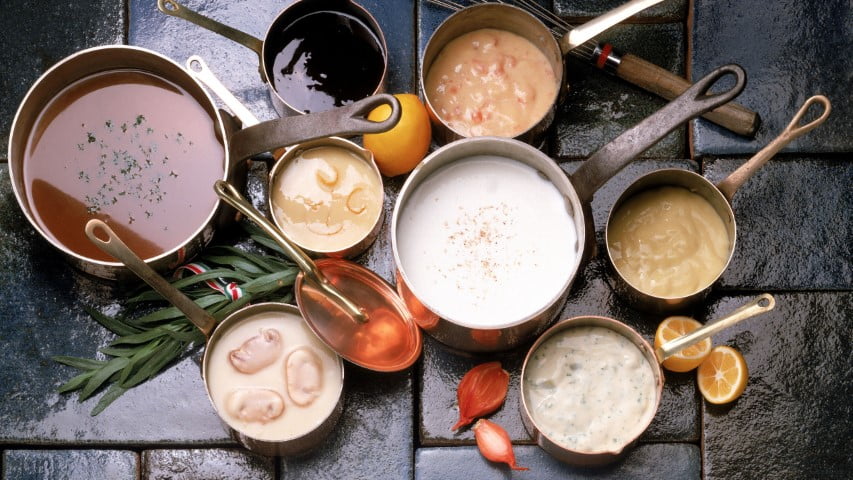 3. Espagnole: it is a blond roux (the butter is burnt to this colour) on the whole Espagnole is a dark roux. Also known as brown sauce, Espagnole begins with a mirepoix (carrots, celery, and onions), a veg or non-veg stock, and deglazed brown bits from lamb or goat bones if it is a non-veg variant. From there on, tomato paste and spices may be added. To make a demi-glace, a rich French brown sauce, combine the Espagnole with more stock; to create Bordelaise, a red wine sauce that pairs well with steak and mushrooms, mix the demi-glace with red wine and herbs. Serve this with fillet for an excellent dinner. It can be paired with roast lamb. Adding tamarind sauce makes it a lovely dip for short ribs and mutton roast.

4. Tomato: The first mother sauce you ever tasted over a heaping bowl of spaghetti. Tomato sauce is often a mixture of just onions, garlic and tomatoes. Although some traditionalists may start with a roux, most tomato sauces merely rely on a tomato reduction to build flavour and create thickness. It is the base for the pizza, and blends well with fried tikka masala, giving an altogether new twist.

5. Hollandaise: Hollandaise is a fancy mayonnaise that uses clarified butter in place of oil and gets drizzled over any dish and eggs without judgment. Instead of using a roux or a reduction, Hollandaise uses the method of emulsifying the act of using a binding agent (in this case, an egg yolk) to force two ingredients that don’t mix well together (here, butter and lemon juice) to like each other immensely. Hollandaise takes patience, as you’ll need to temper the mixture so that the eggs do not curdle. The sauce can break easily, but you can patch things back together by adding a little heavy cream and whisking until the sauce returns to its smooth state. When mixed with unsweetened whipped cream, it can be dolloped on fish, egg rolls and vegetables. Add a bit of chilles, shallots and white vinegar to make it more crunchy and fiery. Dip the pampads and crunch it with your teeth, you are on a different level but it should have Bhoot Jhulakia pods or spike it with chilli oil.