My Bumpy Journey To A Decluttered Wardrobe 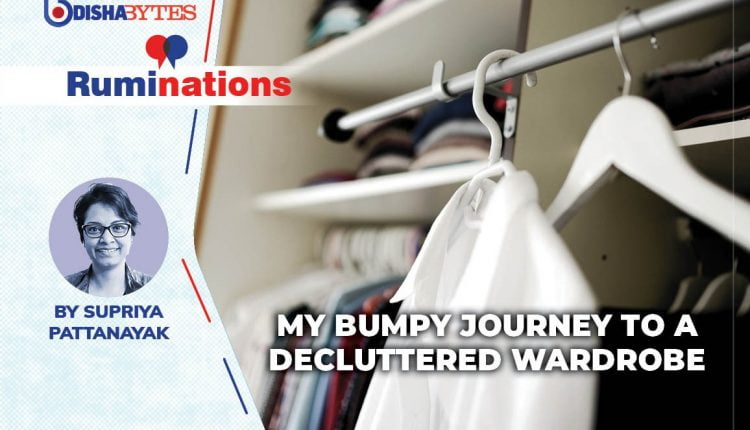 I first came across a small snippet of the Marie Kondo show, Tidying Up With Marie Kondo, a while ago, on Netflix. It was amazing and impressive to watch her transform a messy house into an optimised and ideal world with the right amount of stuff stored in its own place, something which was aspirational for most of us.

For the uninitiated, Marie Kondo is a Japanese cleaning guru. She started cleaning her friends’ houses at the age of 19 for extra money and since then has gone on to become a celebrity tidying consultant, internationally best-selling author and star of her own show. She is particularly known for her KonMari method of sorting through one type of thing and keeping only the ones that spark joy for which she was listed as one of Time’s ‘100 most Influential People’ in 2015. I personally feel her success is more about selling the idea of us having control over our home and by extension our lives than actual cleaning.

As I looked at the state of my overflowing wardrobe, I decided to put her lessons to good use. With images of neatly rolled or folded, colour coded and sorted clothes flowing through my mind and armed with large bags, I started my journey.

The pandemic had kept us mostly housebound with the only exposure being on video calls. So, like almost everyone else in my friend circle, I had ended up using mostly comfy loungewear along with a few good tops and track pants or leggings. I had hardly looked at the rest of my closet full of suits and dresses for over a year now.

With offices opening up it was time to put away my summer clothes, cater to changing fashion along with let’s just say change in body shape due to mitigating circumstances and rearrange my wardrobe, the KonMari way.

I began by clearing out my bed and dumping all my stuff on it, for Marie Kondo has asked us to gather everything together in one place. In hopes of finding some space for their stuff, my family pitched in and dragged out everything I had tucked away in the nooks and crannies of the house.

The bed was overshadowed and things moved to the floor in minutes. Realising that I may have bitten off more than I can chew I started with my first compromise. Instead of aiming for all my clothes, I went with all those in one room. Reassured that this may be an achievable target I started with arranging it into piles of different items and sorting through each of them.

My first reaction was I didn’t even know I had all this stuff. We keep accumulating things as we go along but rarely throw them away. It is common to see piles of letters or other papers, some even unopened, just accumulating on tables or stuffed into drawers to be taken care of later. Sometimes it is due to the lack of time, procrastinating on sorting it or even simply worrying it may be needed at a later point. The first rule of a clean and organised house is probably to fix a time to clean through the clutter and not procrastinate on it. In my experience, it is easier said than done, honestly.

Ploughing through things I reached my jeans pile and hit on the issue of hope. Yes, hope! Hope that I will lose weight and one day fit into my favourite pair of jeans. Hope is a major roadblock to decluttering. We always hope that we will find time to finish a project we started like paint or knit and hand on to the unfinished items. We hope we will learn to play that guitar we bought or that we may go on that hiking trip and need the gear. Although it may sound harsh, I had to let go of my hope and set some realistic expectations to help me sort through the pile.

The next challenge I faced was guilt. I had loads of items that were given as gifts and represented the love that people felt for me. Should I get rid of them? Will they mind if they find out that I do not use it anymore? What about my party wear? I had spent so much time and money on these items that I felt guilty over letting go of them, just in case I needed them later. Will I have to buy it again? Just like hope, guilt is a major emotional roadblock that prevents us from decluttering.

A part of it also feeds into our anxiety for needing something we decide to throw away. What if it suddenly gets too cold and I don’t have my thermal top at hand, which by the way I have not worn for over a decade? It is difficult to let go of our worry for what ifs’ when we want to declutter. I am probably in the majority who have a cupboard full of items that we rarely use but keep for emergencies. We really need to assess what counts as an emergency and what are just in case items. It is probably better to let go of the just in case one take up useful space for an unpredictable future event. In my case, I decided to let go with some mental self-assurance that I can always buy again, as weather changes usually happen with some advance warning.

Moving on I finally hit the saree pile. It made me nostalgic as each item was special and had a lot of sentimental value. Each was like a memento that reminded me of a time bygone, especially joyful. Marie Kondo says we should keep anything that sparks joy. Well, all my sarees did spark a lot of joy but unfortunately, not all were in great condition. I realised that a silk saree, being squashed under others, had now developed tears along the fold. What should I do? My Guru’s advice, based on the TV show, of course, was to throw it away.

In an ideal world, we should let go of sentimental attachments and either donate or dispose of the items else we will end up hanging on to those holiday souvenir hats after they have faded and outlived their use. Maybe we have a room full of old used books. Donating the books to a library would not only clean up our house but spread the joy of reading to others too. After all, the item does not actually hold the memory, our mind does. The item is just a trigger for the memory and we can always reminisce about it without the physical reminder.

I put aside the saree and went about sorting and folding through the rest of my stuff. I ended up with five donation bags full of clothes and one bin bag full for throwing away. I will thank them for their service before I dispose of course, like a good disciple. My family still did not get any additional storage space and were majorly disappointed. I did not achieve the folded or rolled and colour coded look as in the show but my wardrobe looked neater and I had a better idea of what I had before I went out to buy anything new.

The only thing left was the torn Kanjeevaram saree on my bed. Should I blindly follow my Guru? After a lot of deliberation, I decided I did not have the mental fortitude to throw it away, after all, I never claimed to be a perfect disciple. I decided to repurpose the beautiful handwoven work and showcase it instead. It helped me retain my feeling of joy, albeit as an art instead of a wearable. It also shifted the clutter from my wardrobe to my wall. Thus ended my bumpy journey to a decluttered wardrobe.