My Patriotism Versus Yours 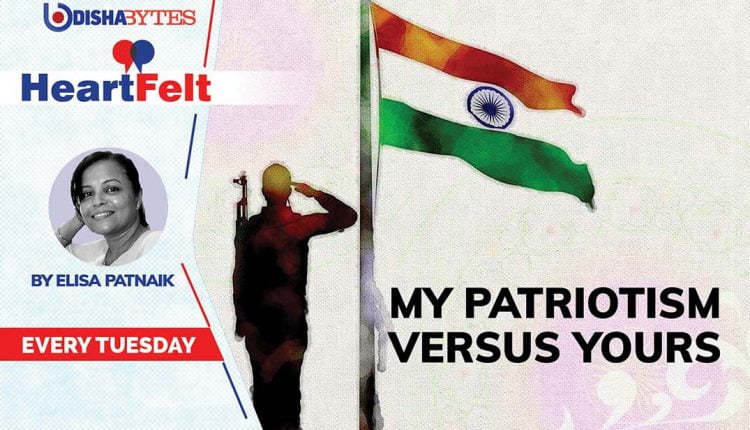 It was a late December evening when my husband and I decided to go for a movie in the multiplex, next door to our house. As we were settling down in our seats, it was time to stand up for the national anthem. My husband, an Indian Army Infantry officer, wears patriotism on his sleeves and leaves no occasion to express it for the nation. We were a couple of seconds into the anthem when his eyes landed on a couple, who remained seated in their seats, throughout the playing of the national anthem, which set my husband into motion.

As soon as the anthem ended, despite my misgivings, he rushed upto them to question them about their ‘evident lack of respect’ for the national anthem. While the couple was slightly peeved, I was enraged with my husband, as I believed it was not our prerogative to moral police, no matter how passionately we felt about something, unless it was a gross violation of humanity or indignity.

I love our national anthem, our national flag and all other emblems symbolising our country. Like countless other Indians, I am filled with an indescribable pride and multitude of emotions, every time I hear it playing, even moved to tears and my skin breaking into goosebumps.

But soon after the incident, I began wondering if patriotism is a self-cultivated deeply personal feeling or can be compulsorily developed by adhering to prescribed actions? Is someone more patriotic if s/he unfurls the national flag and sings the national anthem the loudest? Or, does true patriotism lie in being an honest and responsible citizen, practicing ethical values and contributing to nation building?

Honestly, there is no single answer. I would definitely rank people who lead their lives honestly, honourably with a fellow feeling as more patriotic, even if they do not sing the national anthem the loudest or resort to any of the populist jingoisms. I have also seen people who are chauvinist and misogynist or even casteist wear their brand of loyalty for their nation and transform into torchbearers, flag bearers and rabble rousers in the name of patriotism. On the surface, in their public life, they appear to be true patriots wishing the best for the nation but in their private lives they are the opposites.

The English dictionary describes patriotism as “love for or devotion to one’s country“. … Patriotism means supporting and loving our country even when it’s going through rough or difficult times. You still love your country, even when things are not as you desire or you would like.

So, would true patriots stay in the country and contribute to the betterment of their country or abandon a sinking ship? And what about the NRIs who love their country from far, some of whom dole out advices galore and are displeased with a whole lot of things Indian? They love their motherland but hate the corruption, nepotism, red tapism. And the mosquitoes, unhygienic water and the heat. But they celebrate all the Indian festivals with fervour and gusto in their second home – sometimes more than Indians themselves – wear everything Tricolour, chant all the holy mantras and know all patriotic songs by heart.

But for some, a true patriot may not be among them. Rather it could be an engineer from the best colleges in India, who chose to work for poor farmers in the backward regions of the country. Or a doctor or a teacher who has chosen to work in the tribal hinterlands of India. And yes, the engineer, doctor, or the teacher may not sing the national anthem the loudest. Or may sometimes fail to stand up for the national anthem.

Can patriotism be cultivated in our homes, society and educational institutions? The sense of patriotism and the way we practice or follow it in our lives, keep changing in different time periods, environments, contexts and political regimes.  A child raised in a freedom fighter’s house in the 1930-40s in the background of India’s Independence struggle probably had a greater chance of becoming a selfless patriot then say a child growing up now. We all know the varying brands of patriotism propagated and endorsed based on the dominant political ideology of a nation.

And there are those who demonstrate their love exuberantly for their country but only through their posts on social media. Contented with their posts on Independence and Republic days with Tri-coloured costumes and the choicest of quotes.

Of course, the burning debate continuing lately in our country between patriotism with nationalism has never so palpable. Nationalism is an ideology or a movement relating to identification with one’s own nation and support for its interests, especially to the exclusion or detriment of the interests of other nations. It advocates for citizens’ loyalty and devotion to their country above all other issues and opinions. The pride of nationalism always proclaims everything that is good and virtuous about their country and doesn’t tolerate ‘dissenting’ and ‘anti-national’ citizens criticizing the nation or its leaders.

Patriotism, in turn, is about being proud of what is good about one’s country and at the same time being able to draw attention to what’s wrong and the need to rectify it to make it better without the fear of repercussions.

However, the distance between nationalism and patriotism is not very far. And before you know, it turns to chest-thumping chauvinism and jingoism.

Is patriotism then a feeling felt, cherished and set ablaze only during celebration of national holidays and while watching movies like ‘Border,’ ‘Lagaan,’ and  ‘Ma Tujhe Salaam’? Or when India is playing a cricket match against Pakistan or during the time when our defence forces are embroiled in skirmishes with our next-door neighbours?

Can a person be patriotic without strictly obeying or abiding to long-standing symbols of patriotism or the ones prescribed currently? Or showing ‘evidences’ of one’s loyalty?

Can a soldier fighting for its country at the borders and a doctor serving in the remotest village be both considered true patriots? Honestly, there are no single correct answers. But one thing is definitely sure – there is no one way to express and uphold our love, loyalty and commitment to our country.

Patriotism is not necessarily proclaiming grand symbolisms and practising self-proclaimed tokenisms. Or just exulting the greatness and virtues of our country without searching for honest answers to make India a better, humane and progressive nation.

Sometimes, patriotism can be a quiet, enduring and honest effort. A silent contribution to the larger development of your country. It can be about spreading humanity, a sense of goodness and kindness among your fellow beings without fanning the fires of animosity and divisiveness. It could be about standing for your and other’s rights. Or about being an honest, conscientious and responsible citizen bringing up one’s family.

What Are Breakthrough Cases In Coronavirus That Are On The Rise?

Reminiscing Cyclones In Odisha: Eye On The Storm