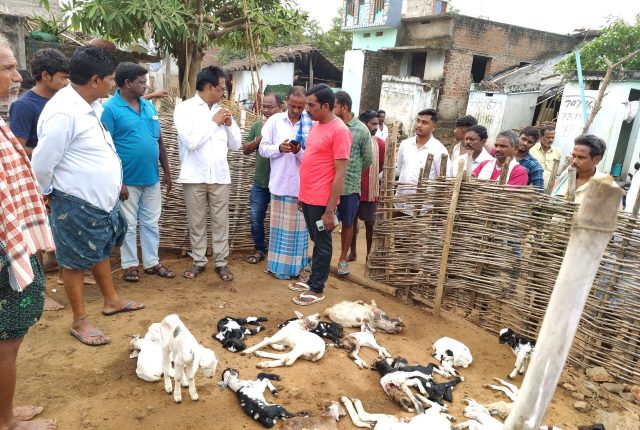 Gajapati: Panic gripped Kidigaon village under Kashinagar block in Odisha’s Gajapati district after over 63 goats were found dead while 28 more were grievously wounded in a suspected attack by wild animals.

According to sources, the matter came to light Friday after villagers spotted the carcasses and informed the local police and veterinary officials about the same. The dead and injured goats, which belonged to B Ramnath and B Krishna, had deep injuries on their throats with their intestines pulled out.

On being informed, local police and forest officials along with a team of veterinary doctors reached the village and performed an autopsy of the dead goats and provided necessary treatment to the injured.

“After joint inspection by the block veterinary officer, revenue inspector and forest personnel, the carcasses were properly disposed of. The condition of some of the injured animals is critical,” said chief district veterinary officer (CDVO) Girish Kumar Mohanty.

Veterinary officials suspect wild dogs might have attacked the livestock, but did not rule out attacks by predators like wolves or jackals, he added.

Notably, the livestock attacked were kept in enclosures. The wild animals, however, did not harm livestock kept in other enclosures, the sources said.

Meanwhile, villagers urged the administration to provide assistance to Ramnath and Krishna as they earned their livelihood through goat rearing.