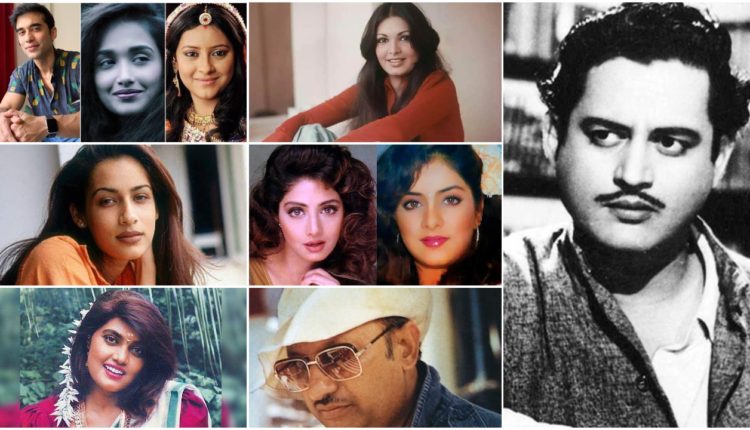 While Bollywood is yet to come to terms with the sudden demise of actor Sushant Singh Rajput, one thing that has become clear is that the life of a celebrity is never easy.

Always under the spotlight and public scrutiny, the air kisses and big bungalows are all a facade like the glamour and glitz that accompanies this profession.

Sushant was found dead in his sixth-floor apartment in Bandra (West) this afternoon. Police are investigating the case as a suicide. However, no ‘suicide note’ was found from his residence. He made his debut with Kai Po Che in 2013 and later starred in films such as Shuddh Desi Romance, PK, and MS Dhoni: The Untold Journey and Kedarnath. He was last seen in Netflix’s Drive. He made his acting debut with Zee TV serial Pavitra Rishta. MS Dhoni, in which he played the former Indian cricket team captain, was among the most successful film of 2016. He garnered critical acclaim for his role in Dibakar Banerjee’s 2015 movie, Detective Byomkesh Bakshy.

The B-town is mourning his death, which has brought back images of actors and filmmakers who had died under mysterious circumstances in the past.

Famous Indian actor, producer, and director, Guru Dutt died at an early age of 39 in October 1964. He was known for his classic films such as Pyaasa, Kagaz Ke Phool, Saheb Biwi Aur Gulam and many others. This legendary actor was found dead at his rented apartment at Pedder Road in Mumbai. There were rumours that he had a very turbulent married life which might have led to his death. Separated from his wife Geeta, he was living alone and was reportedly taking alcohol and sleeping pills together. Many speculations were made on whether it was a suicide attempt or an accidental overdose.

The first Bollywood star to grace the cover of Time Magazine in 1976 was found dead in her home on January 22, 2005. Parveen featured in a number of Bollywood blockbusters throughout the ’70s and ’80s. The actress had been living an isolated life for many years prior to her death. Nobody knows for certain whether she committed suicide or if she died a natural death. She was rumoured to be suffering from paranoid schizophrenia.

Twenty-seven years on, ’90s star Divya Bharti’s death still remains an unsolved mystery. Divya was all of 19 when she fell from her Mumbai apartment’s balcony to death on April 5, 1993. Over two decades have passed since and there’s still little clarity on what actually happened on the night of her death. Conspiracy theories range from murder, accident to even suicide.

The recipient of five Filmfare Award, superstar Sridevi, died at the age of 54 on February 24, 2018. Initially reported to have passed away due to a cardiac arrest at her nephew’s wedding in Dubai, it has now been revealed that she drowned in her hotel room’s bathtub following loss of consciousness according to the postmortem report. More light will be shed on the true occurrence of the events once the complete postmortem report is made public.

The 25-year-old starlet committed suicide on June 3, 2013, in Mumbai. During interrogations, her mother revealed that Jiah had left behind a six-page note expressing how she was being harassed and tortured mentally, reported Pinkvilla. Sooraj Pancholi was arrested and booked on the charge of abatement to suicide. A failed relationship or a dying career were said to have played a part in Jiah’s tragic end. She debuted with James and her last movie was Nishabd with Amitabh Bachchan.

This incident shocked the Television world. On 1 April 2016, Pratyusha was found hanging in her Mumbai apartment and according to the postmortem report, the cause of death was asphyxia. She role in ‘Balika Vadhu’ had catapulated her to stardom.

The master of family entertainers like Amar Akbar Anthony, Coolie and Dharam Veer, Manmohan Desai met his tragic end on March 1, 1994. The man behind megastar Amitabh Bachchan’s career in Bollywood fell to his death from the balcony of his flat when it collapsed. It remains unclear if this was an accident or suicide. Many say Desai took his life as he could not cope up with failing health and declining career.

Death came too soon for this beauty queen-turned-VJ/actress Nafisa Joseph when she committed suicide by hanging herself in her apartment in Mumbai on July 29, 2004, reported Times Of India. According to her parents, Joseph allegedly took the step because her marriage was called off. While Nafisa was doing well career-wise, her personal life was sadly always in the doldrums.

Sejal Sharma, who starred in the Star Plus serial ‘Dil Toh Happy Hai Ji’, Sejal, 26, was found hanging in her flat at Mira Road on January 24, 2020. She left behind a suicide note. It was her debut serial. Her show that began in January 2019, abruptly ended in August. Her friends said on condition of anonymity that Sejal was under depression after her television show came to an end. She was looking for work but nothing had come her way.

On May 26, 2020, television actor Preksha Mehta committed suicide at her residence in Indore by hanging herself from the ceiling fan. SpotboyE reported that the 25-year-old actor, who had acted in shows such as Crime Patrol, Meri Durga and Laal Ishq, was stressed because of work. She left behind a suicide note but did not reveal the reason behind her decision to end her life.

Film and television actor Kushal Punjabi was found dead in his Mumbai apartment on December 26, 2019. According to a Daily Mail report, Punjabi left a suicide note containing his will. The note went on to announce that no one was to blame for his death. Kushal worked in some popular TV shows like Ishq Mein Marjawan, Adaalat, CID and Gutur Gu. Kushal was also part of movies like Akshay Kumar-Priyanka Chopra starrer Andaaz, Hrithik Roshan’s Lakshya, Salaam-E-Ishq, Bombay Boys, John Abraham-Bipasha Basu’s Dhan Dhana Dhan Goal and Kaal.