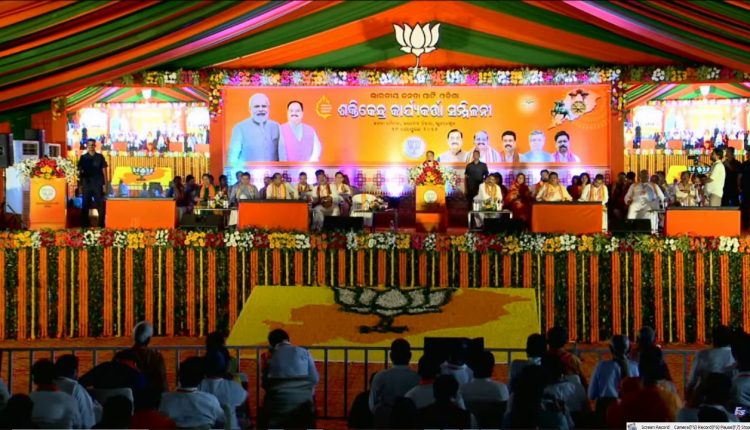 Bhubaneswar: In a stinging attack on the BJD government in Odisha, senior BJP leaders on Thursday claimed that party President J P Nadda’s visit to the state to bolster its prospects fin 2024 polls has triggered fear in the ruling outfit led by Chief Minister Naveen Patnaik.

Shortly before Nadda addressed a meeting at Janata Maidan in Bhubaneswar to kick-start the campaign for the next elections, party MP Aparajita Sarangi said the Biju Janata Dal (BJD) organised a programme in a hurried manner when it came to know about the BJP President’s two-day Odisha visit.

“BJD’s programme was organised in haste coinciding with BJP meeting. Is it because of fear? Why has fear gripped the ruling BJD?” she sought to know.

Claiming that BJP is gaining popularity in Odisha, the Bhubaneswar Lok Sabha member said the party is gearing up to ensure victory in the elections slated to be held in 2024 by strengthening the organisation at the grassroots.

Mounting a scathing attack on BJD, Union Education Minister said people of the state are fed up with BJD rule as they are getting benefitted from the developmental and welfare measures of the Narendra Modi government at the Centre.

Accusing the Naveen Patnaik government of hijacking central schemes, he said sought to know from the Chief Minister why the mineral-rich state still remained poor even after 22 years of his rule.

Describing Nadda’s programme as a ‘test’ for the party, Dharmendra said the results will be declared in 2024 when elections for the state assembly and Lok Sabha are held simultaneously in 2024 and the outcome will definitely be in favour of the BJP, the Union Minister claimed.

Alleging that rich minerals were earlier being handed over to rich businessmen and capitalists from outside the state at a throwaway price, he said Modi has put an end to the practice and now minerals are being auctioned in a fair and transparent manner.

“As a result, the tribal people, poor and downtrodden in Odisha are being benefitted in a big way. Funds from district mineral foundation are being used for the welfare of poor people,” he said.

Accusing the BJD government of depriving the poor people of the state of the benefits of Ayushman Bharat health scheme, Dharmendra said houses meant for the beneficiaries of Pradhan Mantri Aawas Yojana (PMAY) are being grabbed by BJD workers and leaders

Taking a dig at Naveen, BJP national vice-president Baijayant Panda asserted that the saffron party works from the “ground floor, not from any 2nd or 3rd floor.”

Stating that BJP will soon become the No 1 party in Odisha, he said other parties do family politics and work for their own interests, but BJP is the only party that works in the interest of the country.