NASA Names Asteroid After Sean Connery; Check Celebrities Who Have A Name In Space

Washington: National Aeronautics and Space Administration (NASA) on Monday paid homage to the first James Bond, actor Sean Connery who died on October 31 at age 90 by naming an asteroid after him.

Honouring Connery’s performance in the movie ‘The Name Of The Rose’, the space agency shared a video of the asteroid, floating between Mars and Jupiter, and wrote: “As cool as its namesake.”

However, this is not the first time something of this sort has happened. Here are some celebrities who have a name in space.

Anne Frank: NASA had named an asteroid in honour of Anne Frank on the 50th anniversary of her death in 1995. The asteroid was first discovered in March 1942, a few months before Jewish teenager Anne Frank went into hiding with her family in an attic in Amsterdam, during the Nazi occupation of the Netherlands.

Tom Hanks: Hollywood actor Tom Hanks too got such an honour when an asteroid discovered in 1996 was named after him. Hanks portrayed the role of astronaut Jim Lovell in the movie ‘Apollo 13’ which got him the honour of 12818 Tomhanks.

This is not all. There have been occasions when fans have gone out of their way and showed their love for their favourite artistes just like NASA. Among those lucky few are few Indian celebrities.

TV actors like Divyanka Tripathy, Avika Gor, Niti Taylor, Digangana Suryavanshi, and Asha Negi have a star named after them after their loyal fans took the initiative and got it registered. These fans also, later on, met their favourite stars to gift them their own personalised star. 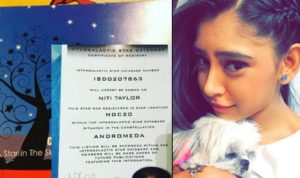