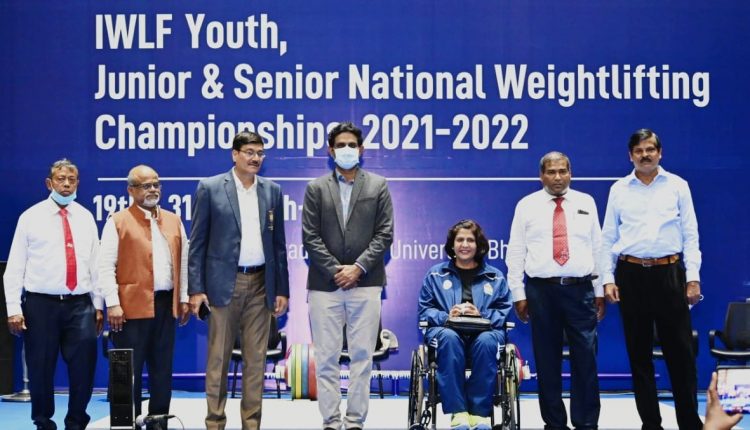 Bhubaneswar: The IWLF Youth, Junior and Senior National Weightlifting Championship 2021-2022 took off, with participation of 800 weightlifters from 30 states, in the city on Sunday.

Declaring the Championships open, R Vineel Krishna, Secretary, Sports said, “Weightlifting has brought laurels for the country in the international arena. Even for Odisha, weightlifting is amongst a priority sport and I hope in the coming years, the weightlifters from our state will bring laurels for the state and country.

“We have also invested in 89 indoor multipurpose halls across Odisha where weightlifting will be promoted and along with our Weightlifting High Performance Centre will collectively boost the weightlifting ecosystem in the state. We look forward to working with IWLF in not only hosting tournaments, but also setting up a National Centre of Excellence in the state,” he added.

Speaking on the occasion, Sahadev Yadav, president, Indian Weightlifting Federation (IWLF), said, “Conducting such a big tournament was a challenge in itself for us. We are grateful to the Odisha government for agreeing to our request to conduct the national championship. They have not only hosted this championship but actually hosted it in the best possible way. The facilities, the hospitality, the venue, everything is of the best quality and we look forward to organising bigger tournaments and one International Competition in the state of Odisha in 2023.”

For the first time in the Championship which will continue till March 31, first, second and third prizes will be given to the athletes in all categories. The first, second, and third place winners will be awarded Rs 10,000, Rs 5000, and Rs 3000 respectively. Competition will be held in 10 different Weight Categories for Youth (Boys & Girls), Junior & Seniors (Men & Women).

This competition is the qualifier for 5th edition of Khelo India Youth Games, 2022 which is scheduled to be held later this year. This will also be considered a Selection Trial for the IWF Youth and Junior World Championships both for eligible lifters.

A2 Milk: Truly Better Or A Marketing Gimmick?