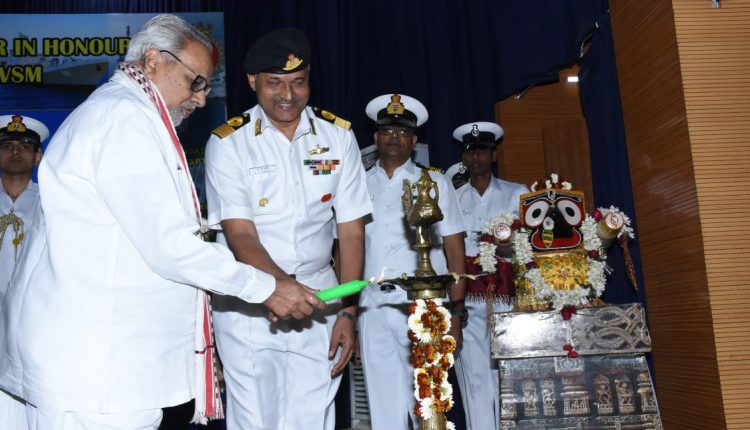 Bhubaneswar: The maiden inaugural Vice Admiral S H Sarma Memorial Lecture was held in Odisha capital to commemorate the yeoman contribution and legacy of the naval veteran, who led the Eastern Fleet in the 1971 war.

The lecture was organised by the Naval Veterans of Odisha, the Naval Foundation (Odisha) Chapter, under the aegis of the Naval Officer In Charge, Odisha in memory of Sarma, who as the Flag Officer Commanding Eastern Fleet, led the Fleet, fought and won the Naval War of 1971 off the erstwhile East Pakistan (Bangladesh) for India.

The event was graced by Odisha Governor Prof Ganeshi Lal as the Chief Guest, while the Guest of Honour was RADM Gurcharan Singh, NM, the present Flag Officer Commanding Eastern Fleet.

Prof Ganeshi Lal spoke of the glorious traditions of the Indian Navy and lauded the stellar role of Admiral Sarma during the 1971 war and his service to the nation. He said that Admiral Sarma was an inspiration  for many Odias and that youth should emulate his ideals.

The Theme of the Lecture was “India’s Maritime Power- History, Victory and Aspirations.”

On the occasion, three eminent speakers presented erudite speeches on topics in consonance to the theme.

While Cmde G Prakash spoke on ‘India’s Maritime Heritage from Cholas to the Colonial Past’, Cmde Ajay Pattnaik, presented a tlak on ‘The Transition of the Indian Navy from Brown Water Force to World’s Fifth Largest Navy’. Cmde Somen Bannerjee spoke on ‘India’s Shifting Role in the Arena of Geopolitics and Aspirations of India at the Global Stage’.

A Coffee Table Book on the life of the late Admiral was unveiled and a commemorative Picture Post Card was released.

The Lecture was attended by senior serving and veteran Defence Officers, followers of Maritime and Naval history, Defence Aspirants, NCC and Sainik School Cadets and the Media.

The lecture series is intended to develop a repertoire of maritime and naval ethos, knowledge and discourses.