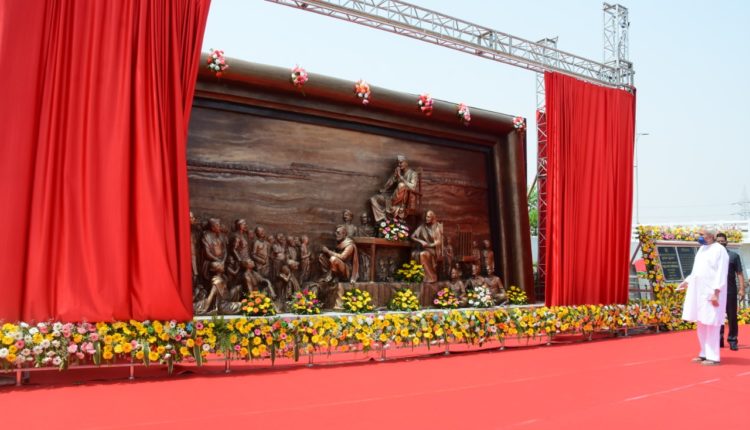 Cuttack: Leading the state in celebrating Utkal Divas on Thursday, chief minister Naveen Patnaik unveiled a bronze statue of Utkalmani Gopabandhu Das and a mural on Mahatma Gandhi’s visit to Odisha in the city.

Unveiling the statue of Gopabandhu, named as ‘Statue of Humanity’, at Gopabandhu Square on Cantonment Road, the chief minister said the great son of soil is an embodiment of humanity. As an inspiring personality, Gopabandhu will continue to motivate the mankind to come to the service of poor and helpless people.

As part of the ongoing centenary celebration of Mahatma Gandhi’s first meeting on the banks of Kathjodi river since March 23, Naveen unveiled a high relief mural sculpture at Bellview Square in the city. Besides Gandhi’s meeting, the mural depicts major events of India’s freedom struggle led by the Father of Nation.

Speaking on the occasion, Naveen said Gandhi continues to inspire the world as an apostle of truth and non-violence. His philosophy and teachings still remain highly relevant in present times, he added.

Stating that Odisha was close to Mahatma’s heart, the chief minister said during his visits to the state for 8 times between 1921 and 1946, he toured different areas to know the people’s problems. Gandhi was also instrumental in formation of separate Odisha state.