Naveen in a tweet said the prime minister’s decision to repeal all 3 farm laws is in the best interests of the country and the farmers. “Your farms and families have been waiting for long and they will be happy to welcome you back,” he said adding that BJD continues to stand with the farmers. 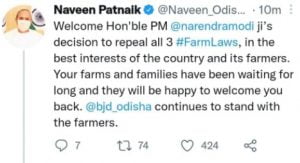 Congress leader of the state Ganeswar Behera also supported Modi’s decision to repeal the farm laws. “We welcome the move of the government. Right from the beginning, Congress had been opposing these ‘black laws’. Farmers have been on protest for over a year and the result is here,” he said.

Former BJD leader Tathagat Satpathy in his twitter handle said it was a battle that was won by the farmers. “Why on earth would farms and families…welcome you back? It was a battle. People died. Farmers won. Hope Orissa too would go back on these laws,” he said. 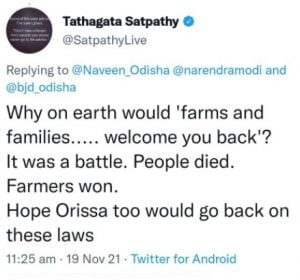 The prime minister in his address to the nation on Friday morning said, “We have decided to repeal all three farm laws. We will start the constitutional process to repeal all the three laws in the parliament session that starts at the end of this month.”

The farm laws have been vehemently protested by the farmers who have been staging protest on the streets of New Delhi for the last one year.