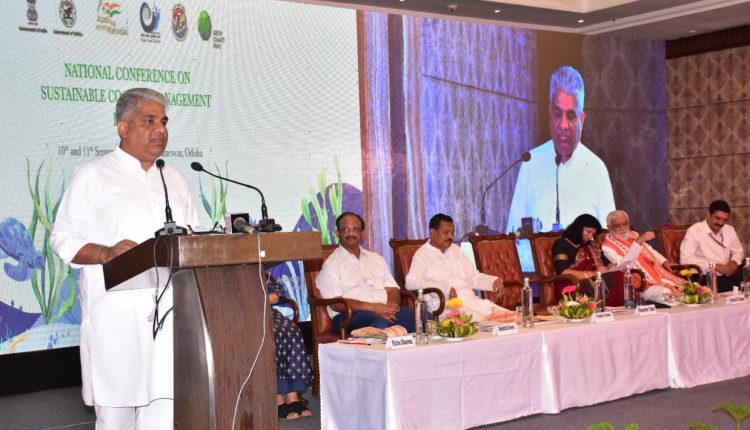 Bhubaneswar: Union Minister of Environment, Forest and Climate Change Bhupender Yadav on Saturday asked the coastal states, including Odisha, to focus on building resilience among the communities living in coastal areas taking into account the changing climate.

Inaugurating the first national conference on “Sustainable Coastal Management in India” at Bhubaneswar, Yadav said the coastline is of immense strategic, economic and social importance to the country. Spanning 7,500 km, it is the seventh longest in the world, and is home to 20% of the country’s population, he added.

The conference is being organised by the Green Climate Fund supported project – Enhancing Climate Resilience of India’s Coastal Communities.

Noting that three of India’s four metropolitan cities lie on the coast, the Minister said there is a great diversity of ecosystems within our coastal regions that support more than 17,000 species of plants and animals. “With the changing climate, we need to build the resilience of communities living in coastal areas.” he added.

The objective of the conference is to bring officials from all 13 coastal states of India under one roof to focus on the three interrelated themes of coastal and marine biodiversity, climate mitigation and adaptation and coastal pollution.

This endeavour is aimed at creating a vibrant network of stakeholders who will continue to engage with each other on the topics but also on cross-cutting themes such as coastal governance, technologies and innovation as well as domestic and international finance.

“This conference comes at an important time as India has submitted its revised NDCs and seeks to create multi-sectoral partnerships to meet these targets,” Yadav added.

Speaking on the occasion, Ashwini Kumar Choubey, Minister of State for Environment, Forest & Climate Change, said such conferences are important to bring the conversations of resilience and sustainability to our country’s coastal areas.  “This was also envisioned in the Prime Minister’s LiFE movement,” he said.

A programme on Enhancing Climate Resilience of Coastal Communities is being implemented in partnership with UNDP in Odisha, Andhra Pradesh and Tamil Nadu. Supported by the Green Climate Fund (GCF), the initiative is integrating ecosystem and community-based approaches to adaptation into coastal management and planning.

World Suicide Prevention Day: A Look At Odisha’s Statistics, Some Films On The Issue