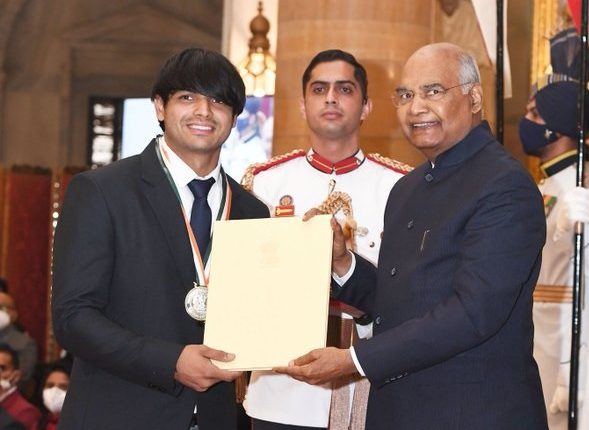 Bhubaneswar: Olympic gold medalist Neeraj Chopra, who trained in Bhubaneswar before the Tokyo Olympics, is all praise for the environment and infrastructure the Odisha government has created to promote sports.

Speaking to an Odia news channel after receiving the Major Dhyan Chand Khel Ratna Award from President Ram Nath Kovind in New Delhi, Chopra said that it was a proud moment for any athlete.

Calling it a big recognition, he said that the award would serve as a motivation for him as well as future players.

Chopra, who trained at the Kalinga stadium in Odisha’s capital before the Tokyo Olympics, praised the sports facilities and environment in the state.

He described the Kalinga stadium as excellent, where he had many memories from his training period.

Chopra, who won the gold medal in javelin throw at the Tokyo Olympics, praised Chief Minister Naveen Patnaik for promoting sports in a big way in the state.

The Olympian also participated in the 2017 Asian Championships at the Kalinga Stadium.

Chopra’s message to youngsters is simple: follow yours dreams, be passionate about it and work hard to realise it.