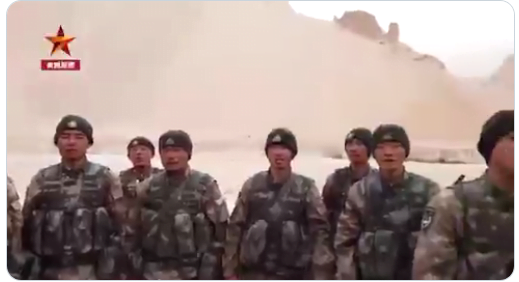 New Delhi: After a journalist from the Chinese state-affiliated media shared a video of PLA soldiers somewhere along the Line of Actual Control (LAC), some netizens are wondering whether Pakistan Army has been assisting Chinese forces in its border row with India, a Times Now report said.

Chinese journalist Shen Shewei shared the 52-second video on Saturday and said: “Here we met with Chinese PLA warriors along China India LAC. Maybe some of them were standing at the Galwan Valley.”

The men are seen singing a nationalistic song titled ‘the Motherland Won’t Forget Me’.

There is speculation on the identity of a bearded man who, according to OSINT analysts, “looks different” from other soldiers in terms of features, height and built.

The song is about the mountains, rivers, the motherland and the people will remember me. The name of the song is The Motherland Won’t Forget Me.

Hathras Case: NCW To Send Notice To These Politicians & Swara, If Rape Is Established