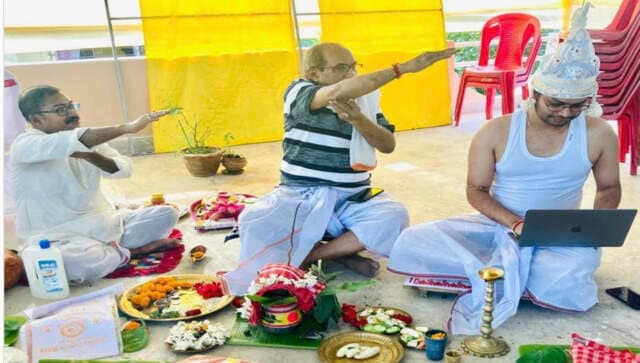 New Delhi: This groom obviously didn’t get leave even for his wedding, otherwise, why would he be working on his laptop while sitting in the ‘shaadi ka mandap’ amidst rituals?

Conversely, his boss has high expectations of him and our groom doesn’t want to let him down, or, it could be possible that our man is so used to working like this, that it really doesn’t matter to him! Whatever the reason, someone clicked his picture and now the whole nation knows.

Although it isn’t clear what he has been working on, looking at his serious and intense expressions it is presumed that it is some official work. The picture was shared by an Instagram page, which is devoted to the contents belonging to Kolkata. While sharing the photograph, the user wrote in the caption, “When “work from home” stretches you to the next level. Tag a friend who might be seen doing this during their wedding.”

Apart from sparking a meme fest in the comments section, the picture also enraged some of the users who were quick to call out the work-life balance. Many even lashed at the groom for not prioritising such a big day of his life. One user commented, “I don’t find this funny. No organisation asks an employee to work on their wedding days, this person needs to get a life and learn work-life balance if this is really true and not staged! God bless the woman he’s marrying.” Another commented, “Jokes aside, this is super toxic.”

Nor’wester & Mass Construction Can Cause Melioidosis: Experts At AIIMS-Bhubaneswar