News Dieting: Is Anyone Game For It? 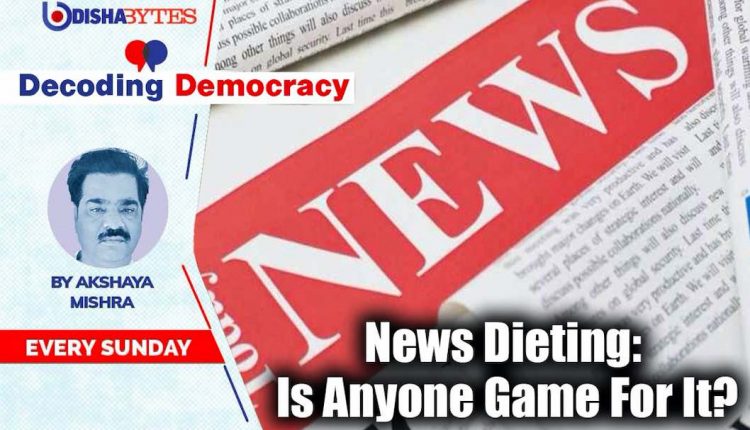 How was the year 2022? Looking back, it was a mixed bag. Like all years it was a melange of decipherable and incomprehensible events, activities and emotions. It had its quota of highs and lows marked by excitement and frustration, triumph and tragedy, the senses of loss and longing, sparkling brilliance and tenebrous mediocrity, and energy and lethargy. Well, it’s a bit late for an article summing up a year gone by. But it’s a ritual of reflection and contemplation that must go on. As also the ritual of promises we make to ourselves for the brand-new year ahead.

Since this series is about democracy and the myriad old, new and emerging strands of thought that influence and shape it, let’s zoom in there via this writer’s personal experiment with news, the force that drives our democracy, or the lack of it in 2022.

As new year’s resolutions go, this was a bit odd. At the beginning of 2022, I decided to go on news dieting for the whole year. It meant cutting down news consumption to the bare minimum, the way fitness freaks cut carbs in their everyday diet. So there was no primetime television, no browsing of social media posts and forwards, no surfing of media sites and no listening to the radio. Any discussion on happenings around the world among peer groups was a strict no-no, as was any debate on so-called ‘burning’ national topics. Just a casual look at the headlines of a few news websites in the morning and the late evening was all in the diet regimen.

It was not an easy decision by any stretch. If you have been a journalist for more than two-and-a-half decades, it is like cutting a limb off your body. News is like oxygen to a journalist. It defines what he or she is; it’s the sole reason for his existence. So staying off it is never easy. It helped that one choose to move away from Delhi, the hub of news, to Dhenkanal, a laidback town not aspiring to be a bustling city, in Odisha. A longish stay in the largely silent place, where people minded their own lives more than Russia attacking Ukraine or SpaceX owner Elon Musk buying Twitter, was a drastic break from the humdrum of the media circles and circus in metro cities.

The motive behind the resolution was to detox and cleanse the internal system of garbage accumulated over years of being in the news ecosystem. It was necessary because there’s too much noise these days that pass off as news. You are bombarded with information–genuine and fake, and manufactured and customised–from several sources. There’s just too much for the mind to process and make sense of. At some point, you fail to distinguish between what is consumable and what is not, and consume it all anyway. The result is a cluttered and confused mind, unable to tell the right from the wrong and the moral from the amoral.

To accentuate the already messed up situation is a new breed of journalists which has effectively erased the thick line between news and propaganda. With exaggeration, obfuscation, hyperbole, manipulation and deliberate distraction as favourite tools of the trade, it has shaped news into something grotesque. Weaponised as an instrument of assault, news is barely recognisable as news now. It’s an implement to divide people and flare partisan emotions. It’s tactfully designed by political players or business interests to be peddled to the masses. Truth, the essence of news, is diluted in the process. A break from all this is what the news dieting aimed at.

At the end of the year, the world looks much better, people are more humane. Looking back, 2022 was a wonderful year. The dieting regime removed a great deal of toxicity within. It decongested the mind from borrowed anger, hatred and all such negativities. It also came with the realisation that what we see on television or get through social media is not necessarily what the world is. There’s more violence in primetime debates and social media than in real life. There are more hate-mongers in the media than in real life. People would be less malevolent if they stayed off news irrelevant to their lives. I tried and the result is there before me.

For 2023, the resolution is to make news dieting stricter. No sneak peek at the television, no newspaper at home, no random surfing of social media, and no cheating. Hope one manages it well, and others see merit in the bizarre resolution.

Meanwhile, in Dhenkanal life goes on at its languid pace. It appears news dieting has always been the normal practice here.