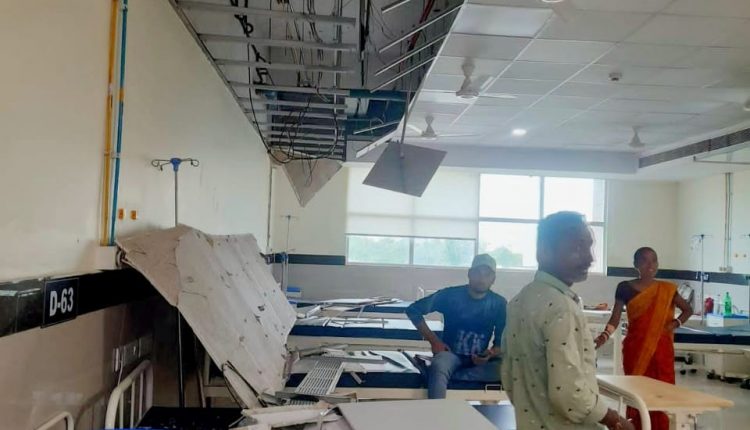 Berhampur: The National Human Rights Commission (NHRC) has been moved over repeated incidents of false ceiling collapse in the newly constructed building of the Super Speciality wing of MKCG Medical College and Hospital in Odisha’s Berhampur city.

In a petition filed with the NHRC, social activist Rabindra Kumar Mishra has pointed out that a New Delhi-based contractors had completed the construction of the 5-storey building with a cost of Rs 150 crore around 4 years back. The Super Speciality Hospital was constructed under Prime Minister Swasthya Suraksha Yojana.

The petitioner also said the hospital has several departments where many doctors and nurses besides the patients remain present round-the-clock. They had narrow escape in several instances of the false ceiling collapse in different departments.

Following the incidents, a special team constituted with officials from SCB Hospital and Works department of the government inspected the construction works and submitted its report to the government.

As per the report, the contractor has not handed over the building officially to the MKCG authorities. Besides, it has not made the building plan and related information available to the officials. As a result, the hospital authorities were finding it difficult to carry out maintenance and repair work of the building.

Following the report, the Health and Family Welfare department had written to the Centre to direct the contractor to take remedial steps for permanent solution to the problem.

Pointing out that the negligence of the authorities violated the right to life and health, the petitioner has sought the Commission’s direction to State and Central governments to take necessary steps to prevent recurrence of such incidents.

Watch Cricket Legends At Cuttack’s Barabati; Check When & Where To Buy Tickets