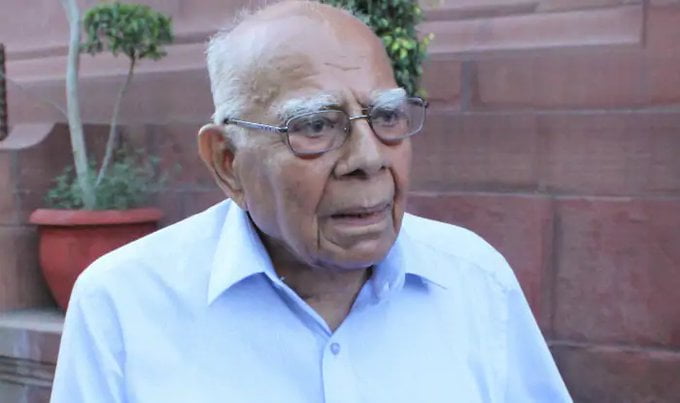 Former Supreme Court lawyer and former Union Minister Ram Jethmalani died on Sunday morning. He breathed his last at 7.45 am at his official residence here, four days short from his 96th birthday.

According to sources, his health had deteriorated over the last two weeks. He was bedridden for a week and had lost a lot of weight.

His last rites will be performed in the evening at the Lodhi Road crematorium.

Jethmalani was the Minister of Urban Development in Atal Bihari Vajpayee-led NDA government. He was elected Supreme Court Bar Association president in 2010.

In the passing away of Shri Ram Jethmalani Ji, India has lost an exceptional lawyer and iconic public figure who made rich contributions both in the Court and Parliament. He was witty, courageous and never shied away from boldly expressing himself on any subject. pic.twitter.com/8fItp9RyTk

Union Home Minister Amit Shah paid his last respects at the house of the veteran lawyer.