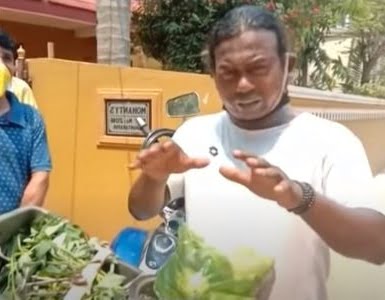 Bhubaneswar: For once, no one will laugh at the sight of popular Odia film comedian Ravi Kumar, better known as Black Ravi. The man who tickles everyone’s funny bone has been reduced to selling vegetables from door-to-door during lockdown.

Ravi Kumar, who has been seen in a number of hit Odia films, was spotted selling vegetables in the state capital’s Shamantarapur area recently.

Ravi has a huge fan following both among the Ollywood audience but also among live audiences during his stage shows. His comic timing and mimicry leave everyone in splits.

However, life has dealt him a cruel blow. During the lockdown, he can neither shoot for films nor perform on the stage.

Fate has not been kind to Ravi on the personal front too, with two of his elder brothers dying in quick succession in separate road accidents a few years back. Ravi takes care of a huge extended family, which includes the families of his two dead brothers and also his parents. He also has a younger brother. As for himself, he has two daughters besides his wife to take care of.

Odisha Fights COVID-19: Get A Transit Pass In Ganjam District Without Any Hassle