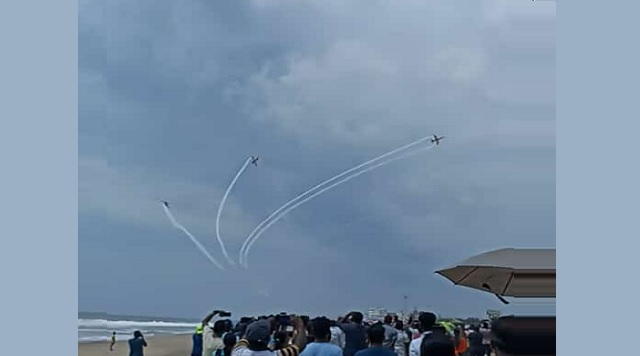 Puri: The Suryakiran aerobatic team of the Indian Air Force (IAF), which enthralled spectators in Odisha’s capital on Friday, will be performing next in Puri on Sunday.

While uncertainty looms over the second air show in Odisha with heavy rain forecast from Sunday under the influence of a cyclonic circulation, a fleet of nine aircraft took Puri skies on Saturday as the team conducted rehearsal on the beach behind the Raj Bhawan here.

The airshow will be held at Blue Flag Beach from 10:20 am to 11:00 am when the team will be exhibiting a series of loops, barrel rolls and other breathtaking aerial manoeuvres with nine red and white HAWK Mk-132 aircraft. This event is being held to commemorate 75 years of Independence.

The Puri district administration has urged the general public to go and watch the show in large numbers.