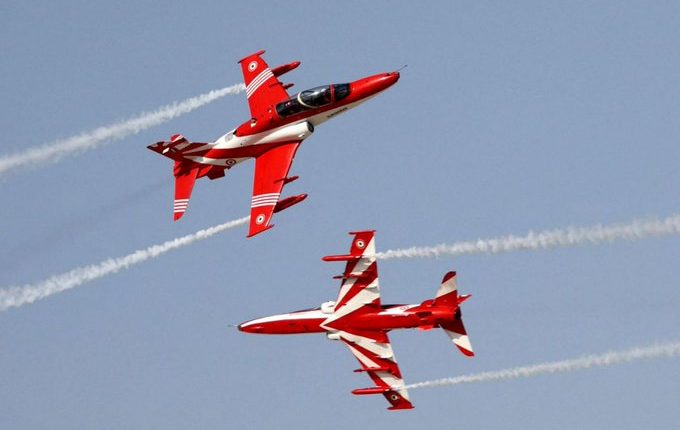 Bhubaneswar: Suryakiran aerobatics team (SKAT) has been making hearts race since the first nine-aircraft formation display during the Independence Day fly-past over the Red Fort in 1998. After a trailer for astrophiles in Bhubaneswar, the air show will begin around 10 am over Kuakhai riverbank at Jaripatna on Friday.

The team will be exhibiting a series of loops, barrel rolls and other breathtaking aerial manoeuvres with nine red and white HAWK Mk-132 aircraft  and the display routine will continue for 20 minutes. The event is being held to commemorate 75 years of Independence.

The Suryakiran team conducts its display to motivate young students to take up a career in the armed forces and to reassure the citizens of the superior flying skills and discipline of the nation’s air warriors.

The aerobatics team was formed on May 27, 1996, with si Kiran MK-II trainer aircraft and is part of the 52nd Squadron. It carried out its first display on September 15, 1996, for the golden jubilee celebrations of the Air Force Administrative College in Coimbatore. It is based out of the Bidar Air Force Station in Karnataka.

The team was grounded in 2011 after Aero India show due to shortage of training aircraft in the IAF and was resurrected in 2017 when it took to the skies with advanced Hawk MK-132 aircraft.

The team currently has 13 pilots and is led by Group Captain Anoop Singh. All pilots of the Suryakiran team are qualified flying instructors and belong to the fighter stream of the IAF selected through a rigorous selection process. It is the youngest fighter squadron with the motto ‘Sadaiv Sarvottam’ (Always the Best).

The first half of the routine includes turns, wingovers, loops and barrel rolls in various nine aircraft formations while they split into two groups to carry out a variety of manoeuvres such as splits, level and rolling crosses, inverted runs, the heart loop in the second half.

THE FIRST AIR SHOW IN ODISHA

After Bhubaneswar, Suryakiran (which means sunrays) will conduct another air show near the Raj Bhavan in Puri on Sunday. However, The IAF had held an air show in Cuttack in 2016 to mark the birth centenary of former chief minister Biju Patnaik.

Hydrogen Powered Train To Be Ready By 2023, Says Railway Minister