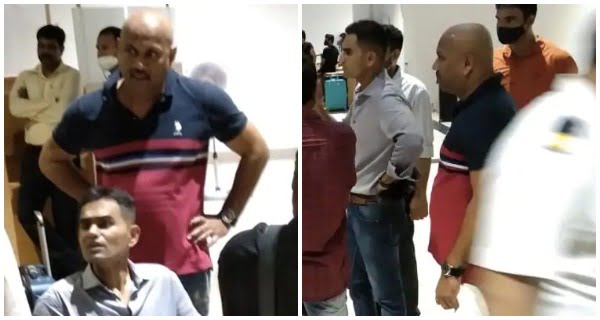 Mumbai: A day after KP Gosavi denied having met NCB zonal director Sameer Wankhede, two pictures of theirs, purportedly taken on October 2 when the anti-drug agency had raised the Goa-bound cruise ship, has added fuel to Rs 8 crore payoff allegation.

Wankhede can also be seen with Manish Bhanusali, a BJP worker who claimed to have supplied information that led to the raid and arrest of Aryan Khan and seven others following the seizure of drugs from the cruise ship, the NDTV reported.

Prabhakar Sail, a witness in the case and personal bodyguard of Gosavi, had earlier alleged that he overheard Gosavi and one Sam D’Souza talking about a Rs 25 crore payoff for the release of Aryan Khan. “They were discussing that Rs 8 crore would go to Wankhede,” he told the mediapersons.

A WhatsApp chat of the duo in which Gosavi is instructing Sail has also surfaced.

Meanwhile, Gosavi against who a lookout notice was issued, resurfaced on Monday declaring he wanted to surrender before police in Uttar Pradesh’s Lucknow because he felt “threatened” in Mumbai.

He had told India Today that he was in Mumbai till October 6 and then switched off his phone after numerous threat calls.

Gosavi had hogged the spotlight after a selfie of his with Aryan went viral.