NRS Doctors Agree To Meet Mamata, But With Rider 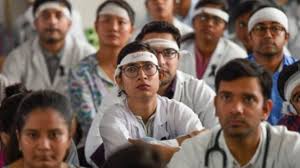 Kolkata: NRS Medical College’s junior doctors have finally agreed to meet Bengal Chief Minister Mamata Banerjee, but with the rider that it should take place in the presence of mediapersons, The Quint has reported.

The doctors have been on the warpath following a severe assault on junior doctors at Kolkata’s NRS Medical College and Hospital when a patient died. Paribaha Mukhopadhyay, one of the injured interns, wound up with a fractured skull and is currently in coma.

The Bengal government had on Saturday accepted all the demands of the agitating doctors and requested them to resume work, but they turned down the appeal and said they will continue their state-wide agitation.

Mamata had called the assault on junior doctors an “unfortunate incident” and said her government was committed to restoring normal services at the earliest.

She also said no stringent action would be taken against protesting doctors and appealed for “good sense to prevail”.

But the doctors said Mamata did not take any honest step to address their concerns. They also urged her to personally meet agitating doctors at Kolkata’s NRS Hospital.

On Friday, members of the AIIMS Resident Doctors’ Association had met Union Health Minister Dr Harsh Vardhan, who assured he would look into their demands.

Doctors in major cities across the country – Delhi, Mumbai and Hyderabad – had on Friday, protested and boycotted work in a show of solidarity with their protesting colleagues in Kolkata.

The Indian Medical Association (IMA) has called for a 24-hour nationwide strike on Monday, the medical practitioners’ body said.

Health services have meanwhile taken a beating with over 300 doctors having resigned across Bengal.

Low Pressure In Bay To Power Monsoon Onset In Odisha!

Mamata Goes All Out To Woo Tribal Voters In Bengal’s…