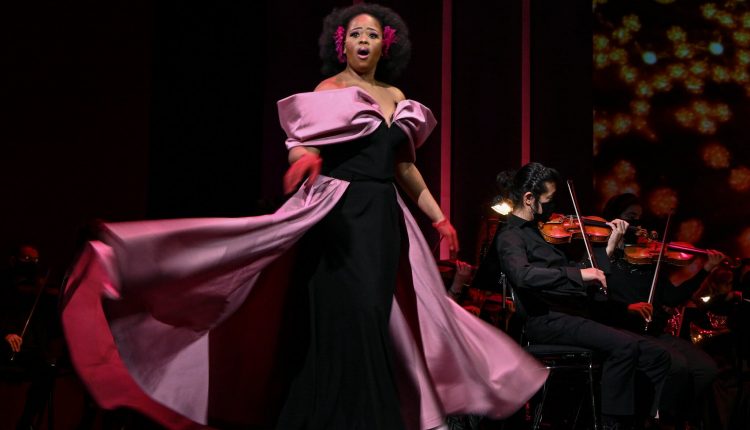 The opera’s artistic director, Francesca Zambello, told New York Times, “Mr. Mohapatra was chosen, in part, because of his work with a previous production of “Aida” in 2012, for which the designer delivered an opulent take on Egyptian fashion that drew from his NYFW collections.

Mohapatra created what he called the “operatic couture” version of the Ginsburg aesthetic: jewel-toned summer gloves, lots of feather earrings, and a voluminous spin on the black robe in the form of ball gowns extravagantly composed of colourful muslins and silks.

“This is my vision of her,” said the Rourkela-born designer.

The opera first contacted him about “Come Home” during a particularly difficult period in his life when he was back home in Odisha for the first time in more than two years, attending the funeral of a brother who died of COVID-19 related issues.

Sketches for the costumes by Bibhu Mohapatra .

“For me, it was important to jump into this because there is no one more American than her,” said Mohapatra of Justice Ginsburg, adding that after watching hours of clips and videos of the legal icon he has become a committed “R.B.G.-er.”

“This is a little bit of my big American dream coming true — especially as an immigrant,” Mohapatra told NYT.

To learn more about the Justice, the designer turned to the Oscar-nominated 2018 documentary “RBG” and watched interviews on YouTube. Then he scoured India for materials, especially his home state, Odisha for rich, colourful ikat fabrics.

Quite early on, Mohapatra decided to abandon the popular markers of Justice Ginsburg’s fashion — “Collars were too literal,” he said — in favour of a more subtle approach. He was especially fascinated by the wide array of gloves Justice Ginsburg wore, such as the fishnet pair she chose for a ‘Time’ magazine shoot, and used those as a connecting thread for the singers, for whom he made assorted version in peacock tones and lace.

“There’s a stealth energy she brought to the table,” the designer continued. “She sent a message with the way she dressed.” One of power, he said, and presence.

In the end, it’s that grandeur of thought he most wanted his designs to convey, and which he will most remember. Justice Ginsburg’s “careful selection of words, her articulation, her thought process. That is something I am going to keep with me for life, Mohapatra was quoted as saying.

Chinese Parents Using Helmets To Give Babies A Perfect Round Head