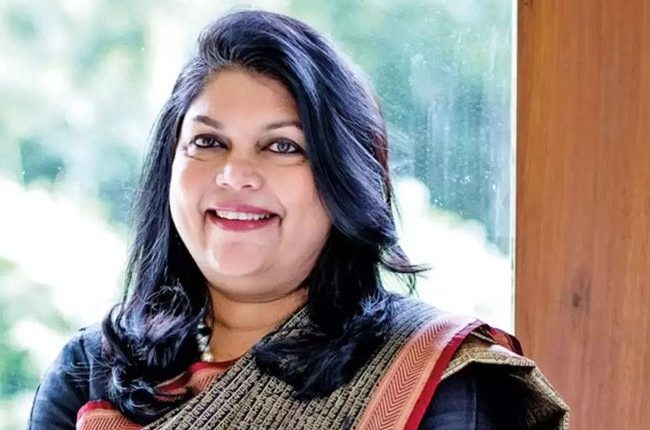 Nayar, who owns about half of Nykaa, is now worth about $6.5 billion. Shares of the firm surged as much as 89% when they started trading Wednesday. FSN E-Commerce Ventures, Nykaa’s parent entity, is India’s first woman-led unicorn to hit the stock exchange.

Who is Falguni Nayar?

After graduating from IIM Ahmedabad, Falguni started her career in consulting with A.F. Ferguson & Co. She then spent 18 years at the Kotak Mahindra Bank, helming several businesses and was the Managing Director of Kotak Mahindra Investment Bank, and was Director at Kotak Securities – the bank’s institutional equities division.

Nayar, who formerly led a top Indian investment bank, founded Nykaa in 2012 just months before turning 50. Back then, most women in the country bought makeup and hair-care products at neighborhood mom-and-pop stores where the selection was scanty and trials unheard of.

The startup has since grown into the country’s leading beauty retailer, buoying online sales with demo videos by glamorous Bollywood actors and celebrities and more than 70 brick-and-mortar stores.

Nykaa is derived from the Sanskrit word for ‘heroine’ and sells items including exfoliation creams, bridal make-up essentials and hundreds of shades of lipstick, foundation and nail colour to suit Indian skin tones, skin types and local weather. Its sales surged 35% to $330 million in the year ended in March, according to its filing. Nykaa is a profitable company, a rarity among the internet startups making a debut in the public markets.

Heading a team of over 1600, Falguni has built Nykaa, a beauty and lifestyle retail empire emerging as India’s leading beauty retailer with a portfolio of 1500+ brands, including its own private label, available online and across 68 stores in India.

Nykaa is a rarity among internet startups making a debut in the public markets. Nayar owns her company stake through two family trusts and seven other promoter entities. Her Ivy League-educated daughter and son, who run different Nykaa units, are among the promoters.

Who Is Malala Yousafzai’s Now-Husband Asser Malik? When Did They Meet?