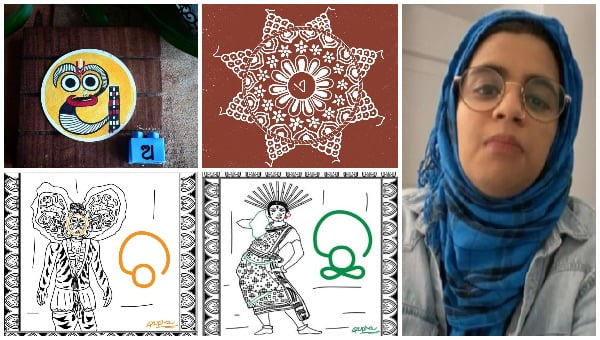 Bhubaneswar: She learned the Odia language for a few years while in Odisha before shifting to a foreign country. The connection with the language, however, stayed with her and this saw her starting a campaign #63daysofodiatype on a social networking site.

Here we are talking about Azkia Aarif, a graphic designer based in Toronto, Canada. She was born in Bhubaneswar and studied up to Class IV here.

She came to the limelight following this campaign, where people are invited to express their interpretation of 53 Odia alphabets and 10 numbers while expanding the borders of typography, on Instagram which was set in motion on Utkal Divas (April 1).

The 29-year-old gives shapes to different Odia letters while showcasing the culture and tradition of the state through them.

Showcasing their creativity, more than 20 artists have been posting on this page daily, and they include people from Odisha, Bengaluru, Ahmadabad, Pune, Singapore and Toronto.

“Odisha is known for Puri and Pakhala (water rice). But the Odia language is equally beautiful. I want to introduce this language to the world,” she told a vernacular daily.

An alumnus of the National Institute of Fashion Technology (NIFT) at Kannur, Azkia said that Odia alphabets stand out because of their curved appearance. “This was the result of the practice of writing on palm leaves which have a tendency to tear if one uses way too many straight lines,” she was quoted as saying by The New Indian Express.

She educates people about interesting aspects of Odia script and numerals.