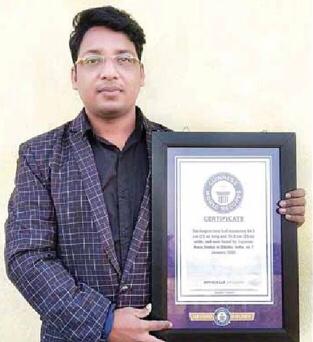 Boudh: Odia man Jayaram Rana (30) of Ambagaon under Kantamala block in Boudh district has found a place in Guinness Book of World Records by producing the world’s largest taro leaf.

Jayaram is an Organic Chemistry researcher who produced the largest taro leaf by planting a taro tree in a special procedure.

According to sources, when he was out for a walk near hillside, he found a taro plant. He brought that home and cultivated it near his well. He treated it with care until it grew to its massive size. He used organic fertilizer to produce the largest taro leaf.

He had applied for the award on January 7, but after three months his efforts were recognised. He received the certificate recently.

Jayaram, who has been researching on different formulas in his lab, has a lab named ‘Health Science And Research Foundation’.